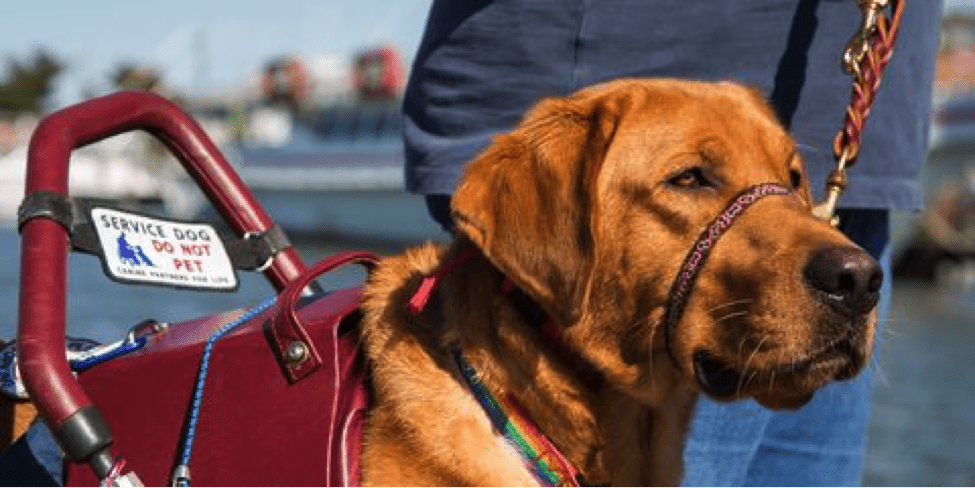 There are so many unique situations and disabilities that define the human race, and the majority of these disabilities can be greatly improved with the use of a service animal. We are lucky enough that animals can be specially trained to help us complete tasks in our daily lives. The most amazing part of these animals is that they can be trained to help with countless issues. It is hard to believe that there are so many different types of service animals.

To prevent any confusion, let’s start by going over what exactly a “service animal” is.

What is a Service Animal?

Due to the recent surge in people making use of service animals and emotional support animals (ESAs), there is some confusion as to what the difference between the two is. Put simply, a service animal is an animal that is specially trained to perform specialized tasks that their owner is either incapable of doing or would have a very hard time doing for themselves. Most often, dogs are utilized as service animals due to their intelligent nature and strong connection with the human race; however, this doesn’t mean other kinds of animals are incapable of serving as a service animal.

The highly-trained nature of service animals means they can be trained to understand the specific needs of the individual handler to whom they are issued. This training allows them to aid people with all kinds of different disabilities.

What Disabilities Can Service Animals Help With?

Service animals are intelligent and specially trained animals capable of aiding humans in various functions and tasks. There is no exhaustive list of all possible applications for service animals as more are discovered on a regular basis, but here are some of the most common ways in which service animals help improve the lives of their human counterparts.

For people with hearing impairments, these types of service animals assist by alerting their human to noises such as alarms, doorbells, or crying babies. When the animal hears the sound, they’ll touch their humans and lead toward the noise. This can be something as innocuous as alerting their human when a phone is ringing or someone is knocking on the door, but animals trained for aiding those with hearing impairments can also alert their owner if a fire alarm is going off or when traffic is approaching.

Dogs are known to have incredible hearing and are the go-to animal for service animals aimed at helping humans who are limited in their ability to hear. Many deaf or hearing-impaired individuals have their daily lives vastly improved through the use of specially trained hearing-aid dogs.

Amazingly, these types of service dogs can provide independence and security by alerting to chemical changes in their handler’s blood sugar. These animals can detect scent changes associated with hyperglycemic or hypoglycemic events in diabetics which are imperceptible to humans, but dogs can pick up on them and alert their people to blood sugar highs and lows before the levels become dangerous.

This provides those with diabetes an early warning system to alert them in times when they may need to take an insulin shot or seek out some sort of food or drink to increase their blood sugar level. Service animals trained to provide aid to those with diabetes can make living with diabetes much less scary by providing sufferers with the comfort of knowing they have an animal looking out for them at all times.

Furthermore, these animals can also be trained to draw attention to their owners if the human becomes incapacitated or unable to speak. In times of need, service animals can help save lives and make deadly diseases like diabetes easier to manage.

Allergy detection dogs are trained to sniff out and alert to the odor of things such as peanuts or gluten. This ability can be lifesaving for those who suffer from extreme allergies. The modern world in which we live involves foods that come from unknown sources and may be inadvertently compromised by allergens which are not readily apparent. Whether the food was accidentally cooked with peanut oil or the packaging itself contains allergens, service animals trained to sniff out specific scents can alert their owners if something dangerous is contained within something they are about to consume.

This versatile category of service animals assists people who are suffering from issues like depression, anxiety and most often post-traumatic stress disorder (PTSD). PTSD can afflict people after they’ve served in combat, worked as a first responder, or experienced abuse, natural disasters, terrorism and other life-altering events such as car crashes.

Aside from PTSD, psychiatric support animals (PSAs) can also aid those who suffer from obsessive-compulsive disorder (OCD) or all sorts of other emotional and mental disabilities. In the case of OCD, service animals are trained to be keenly aware of their handler and will help dissuade them from becoming absorbed by meaningless tasks or harming themselves by absentmindedly picking at their skin repetitively. 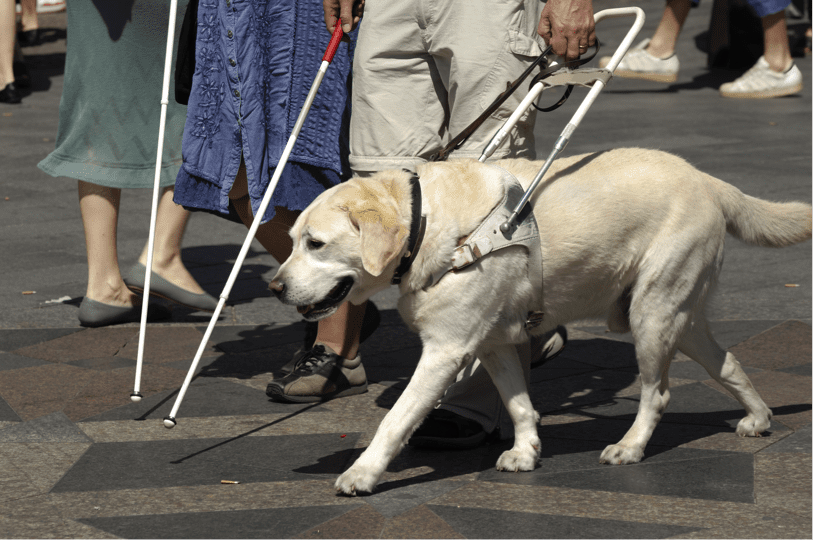 This type of service animal is most often paired with individuals that are blind or visually impaired. A guide dog often accompanies his owner wearing a U-shaped harness, which allows the human to control the animal using a series of directional commands. These dogs are trained to identify and avoid potential obstacles both inside and outside of the home. Often, guide dogs are trained to negotiate busy areas, including city sidewalks and public transportation.

Guide animals used to aid those who are visually impaired can help those who are blind regain their independence and feeling of security out in public. The assistance of a service animal can help them navigate busy streets and establishments without worrying as much about bumping into people or walking in front of traffic. These service animals can save lives and make daily tasks such as grocery shopping much easier and more pleasant for their handlers.

Although seizure service animals are trained to assist people that have seizures, they cannot predict an oncoming seizure. However, they can activate life-saving alert systems that summon medical help, roll a person into proper position, or retrieve medications that can be administered to help put an end to a seizure. Service animals can also be trained to help clear the airways of their handlers by rolling them on their side and ensuring they don’t suffocate on vomit or other substances that may be on the floor or obstructing their breathing passages.

Service animals trained for those who suffer from seizures are often taught to help prevent the person from harming themselves when they fall from the seizure and by attempting to keep them from rolling into the street or into other obstacles. Furthermore, these service animals are trained to bring attention to their masters so others can provide aid or contact emergency services on their behalf.

Much like with other types of service animals, the specific tasks that these animals can be trained for varies and is specialized for the specific needs of the disabled person for whom the service animal is intended. These animals provide aid in whatever way they are capable and can help people increase their independence and confidence when going through their daily routine. The assistance of a service animal can make the lives of those with mobility impairments much more enjoyable and safe. 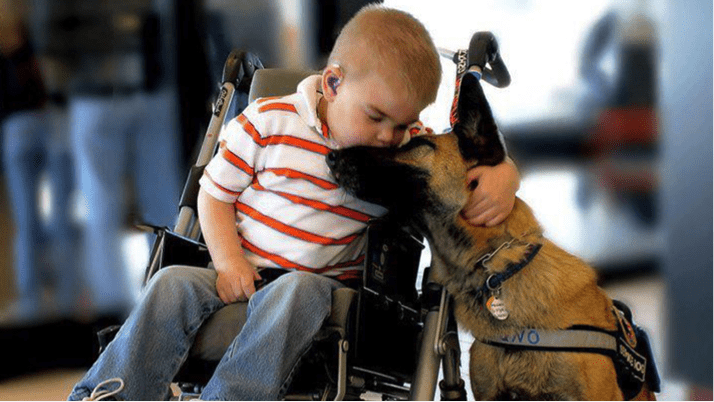 Autism, or autism spectrum disorder (ASD), is a fairly common condition that affects an estimated 1 in 59 children in the United States today. ASD can cause various social and sensory difficulties for those who suffer from it. Service animals can be specially trained to help make life easier for those who suffer from autism in many different ways.

Service animals help increase a person’s safety and sense of security through their presence and the actions they can take on behalf of their handler. In addition to improving an autistic person’s quality of life by reducing isolation and comforting the person in stressful times, these animals are also trained to keep children from running away and can often track the children if they do runoff.

Service Animals aren’t restricted to just being dogs. Dogs are the most common type of service animal used, but the following animals are also permitted to be specially trained as a service animal:

The bottom line is that there are many different disabilities or disorders that can be treated with the use of a service animal. Obviously, these animals can’t provide a cure, but they can help make everyday life a little more bearable.