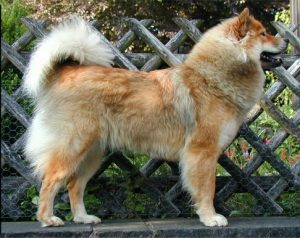 It’s amazing how distinct and unique each breed of dog can be from another. The evolution of these animals over time is a fascinating topic to learn about because of how close humans and dogs have been throughout history. Humanity has played an extremely active role in the development of dog breeds for centuries with a lot of time and care put into trying to breed dogs that are perfectly suited for whatever task the breeder has in mind.

Some dogs are bred for their agility or speed while others are bred for intelligence or utter cuteness. The Eurasier also called the Eurasian, is a fairly new breed of dog that was designed with the singular goal of creating the ultimate family dog. As such, their personality and appearance were tailored to make them great additions to any family’s home.

The Eurasier is a medium-sized dog that sports distinctly wolf-like features in some ways. When fully grown, they stand roughly 20 to 22 inches in height and weigh in around 50 to 65 pounds. Their coats are comprised of two separate coats: a thick and soft undercoat as well as a straight and wiry overcoat. They are generally colored very similar to wolves with variations of black, gray, silver, sable, and red colorations of their coat. The length of their coat is medium, and it has a very thick density thanks to their double coat. The hair on the back of their legs and tail is longer than that of the rest of their coat.

Eurasiers have dark brown, almond-shaped eyes and black noses. Their lips and eye rims are also black, which can give them somewhat of an intimidating expression to those who aren’t familiar with the animal. They also have wolf-like ears that stand erect on top of their wide, round head. Eurasiers bear an alert expression on their face that hints at a readiness for action or play at any given moment. They have a gentle and loving nature towards trusted members of their family.

The Eurasier is a breed that originates from a German breeder in the ‘50s and ‘60s. They are the product of the breeding of a Chow Chow and Wolf Spitz which was originally dubbed the Wolf Chow. Wolf Chows were then bred with Samoyez added into the mix. In 1973, the Federation Cynologique Internationale recognized this breed as the Eurasier. This name was given to them by their original breeder, Julius Wipfel, in recognition of their Asian and European heritage. These animals were and still are primarily found in their native homeland of Germany where they enjoy some distinction as great family dogs.

A brief glance at the history and characteristics of their ancestors reveals some important information regarding what to expect from a modern Eurasier. Chow-Chows, sometimes simply called Chows, are a beloved breed from China where their Chinese name translates literally to “puffy-lion dog”. They are a distinguished animal in China with a long history of breeding. Their sturdy frames, cute faces, and bushy coats were passed down to the modern Eurasiers and are a large part of where they get their distinctive look and the Asian part of their name.

The Wolfspitz, or Keeshond, also contributes a fluffy mane and medium build to the overall appearance of today’s Eurasiers. Keeshonds originate from Holland and Germany, making up the European aspect of the Eurasier lineage. Samoyeds, later introduced into the gene pool for creating what is known today as a Eurasier, were also dogs with full, fluffy coats. However, the Samoyed was a larger size than the Keeshond or Chow and was bred for its intelligence that was geared towards its use as a herding animal. The combination of these three animals is what resulted in creating a beautiful, cuddly, and intelligent creature known today as the Eurasier.

Eurasiers are extremely devoted to their families and are loving dogs once their trust has been earned. However, they are quite standoffish when it comes to strangers and it can take quite some time for them to grow comfortable around new people. This doesn’t result in them being aggressive or misbehaved, they simply avoid strangers and prefer to only be touched by family members. Eurasiers are great family pets that do very well with both children and adults. They also play well with other dogs that they were raised with as puppies.

Eurasiers are not overly noisy; however, they are prone to barking when strangers approach which makes them great alarm dogs. This animal is very social and loves to spend time with his family. As such, they don’t do very well in kennels or chained up alone in the yard. These pets do best in homes where there is at least one person around at all times due to their unease and agitation at being left on their own. Aside from this, they are quite relaxed and gentle dogs when surrounded by their family.

The Eurasier is confident and good-natured. They love to spend time with the family and enjoy socializing and being touched by those close to them. Eurasiers are ideal for families with older children or younger children who respect their boundaries and won’t tug and pull at them too roughly. These dogs are loving and loyal companions that can serve as fantastic alarm animals thanks to their natural distrust and aversion towards strangers.

The Eurasier is considered to be a fairly healthy breed thanks to the relatively healthy origins from which they come. The early animals of this breed were fairly genetically similar due to them coming from a single breeder which means they may have a slightly increased chance of inheriting genetic defects. However, there has been a fair amount of diversification of their gene pool in the past few decades so this shouldn’t be too much of a problem, but it is worth looking into.

They are expected to live a healthy life lasting roughly 12 to 14 years in duration. They can be somewhat prone to hip and elbow dysplasia in later years of their life like many other dogs. They also have a tendency for developing issues with their vision when compared to other breeds. Hypothyroidism is another health issue that has been associated with Eurasiers to some degree of frequency.

As a medium-sized dog that isn’t exceptionally active, Eurasiers only require a moderate amount of food. Feeding should occur at regular intervals to instill a sense of constancy for the dog that will help provide structure to their days. Carefully measuring food portions while tracking the weight of your Eurasier will help you determine whether your pup is getting too much or too little food on average. Dry kibble is generally thought to be best with the strong recommendation of using formulations made specifically for the age, size, and activity level of the animal in question.

Regarding activity levels, Eurasiers are actually considered to be somewhat lazy by many of their owners! This may be a blessing for those who enjoy spending lots of time cuddled up on the couch with their pups. However, all animals require some amount of regular exercise and it’s recommended that Eurasiers are walked for at least 30 minutes a day to prevent them from becoming unhealthy and overly sedentary.

Regular exercise helps joints and muscles develop and maintain strength which is important for ensuring your Eurasier can remain healthy and active for most of its life. Taking your dog out for a walk is also a great way to get yourself some much-needed exercise. Eurasiers, though not particularly active animals, love spending time with their masters and will relish the chance to go out for a walk with their favorite person beside them.

Eurasiers, despite their full, luscious coat, don’t require too much in the way of grooming. They are seasonal shedders that will shed quite a lot twice a year which means it’s best to make sure to brush them frequently during these times. Metal combs and pin brushes are recommended during shedding seasons to help cut down on the shedding that will occur throughout the day. Outside of this, Eurasiers should have their coats brushed once every other week to remove debris and tangles.

The Eurasier doesn’t require frequent bathing and should really only be bathed a couple of times a year or once a month at most. Frequent bathing can result in drying out the skin of your Eurasier and causing discomfort or even resulting in rashes forming. Baths should be done using shampoo formulated especially for dogs as human shampoos can be much harsher on their skin comparatively.

Eurasiers, as mentioned above, aren’t particularly active animals which can mean that their nails don’t get much natural wear. This means it’s important to help keep them clipped to a reasonable length to prevent them from injuring themselves of others. Nail trimming should be done about every three weeks or so to keep their length down.

Furthermore, Eurasier ears and teeth should be checked regularly for excess buildup which can cause infections to occur. Teeth may need to be brushed every so often to remove plaque and buildup from their gums which can cause disease. Using toys or treats designed to help remove plaque can help cut down on buildup and make brushing a less frequent requirement.

Overall, Eurasiers are considered to be quite easy to take care of regarding grooming and maintenance needs. The shedding can take some time to get used to for owners who have not had shedding animals previously, but regular brushing of the coat will help to greatly reduce the amount of loose Eurasier hair floating about your home.

Eurasiers are known to be extremely calm, loyal, and social animals that are especially keen to please their masters and family. They are also fairly intelligent creatures that take well to training. Socializing these animals to do well with strangers and other dogs is something that should occur from an early age and continue throughout life. In fact, starting training as early as possible is always recommended for providing you the best chance of getting an obedient and mindful pet.

Eurasiers are somewhat notoriously timid when it comes to anger and punishment from their owners. They respond extremely well to praise and kind words, so a rewards-based training method is strongly urged when attempting to form the habits of your Eurasier. This doesn’t mean you should be a pushover when it comes to training your Eurasier. They respond well to firm and confident leadership.

Treating your Eurasier with firm commands, gentle adjustments to their behavior, and plenty of praise for their good behavior will serve you greatly in the process of training this beautiful animal.

Eurasiers may not be the ultimate family dog due to their constant need for companionship that makes leaving them alone at home a concern; however, they make amazing pets for those who do spend most of their time at the house. They are fiercely loyal and loving towards family members and aren’t afraid to speak their mind when it comes to their distrust of strangers encroaching on their property.

These adorable animals are wonderful pets for people who want a dog that wants to spend the whole day with their master. This characteristic combined with their gentle demeanor makes them especially suitable candidates as emotional support animals. Eurasiers want to always be by the side of their master and relish time spent together. This loyal pup will keep you company all day, every day.

Best Dog Breeds for an Apartment
10 Most Affectionate Dog Breeds
Everything You Need to Know About Labrador Retriever Training
The Spanish Mastiff Breed: Perfect Pet or Great Livestock Guardian?
Register Your Emotional Support Animal And Receive All The Benefits