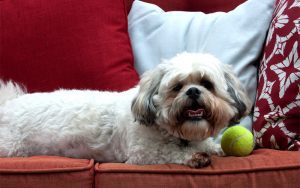 The Zuchon (pronounced zoo-shawn), sometimes also called Shichon or Teddy Bear, is a hybrid breed designer dog. Zuchons are a cross between Bichon Frise and Shih Tzu breeds. As such, their name is derived from the two breeds from which they own their lineage. Zuchons are not recognized as a breed by the American Kennel Club (AKC) or other major dog breed registries.

Whether or not Zuchons are officially recognized doesn’t matter to them or their owners one bit. They are popular for their diminutive form and teddy-bear like appearance. The Zuchon is a cute and cuddly pet that fits perfectly on anyone’s lap.

Fully grown Zuchons stand at the shoulder roughly 9-12 inches tall and average about 5-15 lbs. They are a diminutive toy breed that sport round heads, floppy ears, and large eyes. They have a fairly long, soft coat of curly, wavy, and silky fur which gives them the appearance of a teddy bear when groomed. Their colorations vary through a range of colors: black, white, silver, red, chocolate, tan, or cream.

The Zuchon sheds very lightly if at all and has the added benefit of wearing a hypoallergenic coat which means even those with dog allergies could farewell with this cuddly friend in their home. Due to the fact that they are a hybrid breed, their appearance can vary from animal to animal. They generally have quite short snouts due to their Shih Tzu lineage, but the length can vary to a degree. Their cute form and inviting face is likely to make you fall in love at first glance.

As a designer dog, the history of Zuchons is rather short. Americans started breeding designer dogs in the early ‘90s. The Zuchon is a more recent cross breed which started to become popular in the past decade or so. Despite the fact that Zuchons are a relatively new breed, their popularity has grown quickly. In fact, their popularity is such that there is a decent chance they may become an officially recognized breed by the AKC in the near future.

They are currently a recognized breed by the American Canine Hybrid Club and the Designer Dogs Kennel Club. The popularity of Zuchons as a pet is thanks, in part, to social media outlets like Instagram. Zuchons (or Shichons) are a popular hashtag with over 400,000 posts related to them on Instagram. Many people find pictures of these adorable dogs and decide they absolutely must have one of their own.

Some toy dogs are known to be yappy and temperamental. Luckily, this is not the case at all with the Zuchons.  Zuchons are a hybrid of two purebred animals which have a history of being bred for demeanor and ability to adapt well to different homes and other animals. Due to the fact that Zuchons are derived from Shih Tzu and Bichon Frise breeds, they are dogs who have no history of hunting instincts. As such, they tend to get along well with other animals and breeds.

Zuchons are considered to have wonderful personalities. They are playful, lively, and well-behaved. Zuchons are known to adapt to the personality and tendencies of their owners. This means they are equally happy sitting on a couch all day as they are going for walks and playing fetch or chase. They are devoted family animals who are highly intelligent and take well to training.

Zuchons are known to love spending time with their masters; however, this can also be the source of one of their less favorable characteristics. Zuchons tend to suffer from separation anxiety and can become depressed or anxious when left alone for too long. They much prefer to be kept company throughout the day to being left on their own and this can result in bad behavior when left unattended. As such, Zuchons are not the best dogs for owners who leave an empty house for long periods of time throughout the day.

The small size and friendly nature of Zuchons make them well-suited for an apartment or house life with the caveat of needing to have someone there to keep them company for most of the day to prevent them from suffering from separation anxiety and loneliness.

Zuchons have an average life expectancy of 12-15 years. They are generally considered to be happy and healthy animals. Zuchons benefit from their hybrid lineage which helps them avoid congenital issues that are common among purebred animals which can have poor health due to lack of genetic diversity.

Zuchons which are first-generation hybrids take advantage of a more diverse gene pool, but further generations of Zuchon are known to have higher risks of illness and genetic defects due to the prevalence of inbreeding. Some of the major defects that present themselves often in designer dogs are epilepsy, deafness, liver disease, and hip dysplasia. To avoid these issues, it’s best to look for first-generation Zuchons who have pedigreed parents with a healthy history.

One issue that Zuchons are specifically prone to is breathing trouble as a result of their Shih Tzu heritage. Shih Tzus are known to have very short snouts with nostrils that can often turn downward. This anatomical trait can result in difficulty when breathing in due to the ability for the nostrils to close when they inhale. When picking out a Zuchon puppy, look for ones with slightly longer snouts and keep an eye on their nostrils when they respirate to see whether they will have trouble breathing in the future.

The Zuchon is an energetic and peppy little pup with a happy disposition. They enjoy regular bouts of play and will happily go for walks or play fetch in the yard. It is recommended that Zuchons, like all animals, get regular exercise to keep them healthy. However, Zuchons are not particularly needy when it comes to energy levels unlike other dogs such as terriers and labradors.

Even just some light play on the couch can be enough exercise to keep Zuchons happy. They also have been known to enjoy going for a swim and chasing after balls and toys. 15-30 minutes a day of moderate exercise will keep these pups healthy and happy. Thanks to their small size, Zuchons require only a small amount of food every day (about 1.5 cups of food daily).

As was mentioned earlier, Zuchons tend to shed very little if at all and their fur is very low in allergens. Zuchons tend to be indoor dogs and generally don’t get terribly messy; however, their hair does require upkeep. They should be bathed around once a month to keep them clean while avoiding drying out their skin. Zuchons should also be brushed regularly, possibly even on a daily basis to prevent tangles and matting.

Their thick and moderately long coat is prone to getting matted due to the fact that they don’t shed. Brushing their coat and tails on a regular basis is necessary to ensure their fur remains soft and healthy. Zuchons may also require hair trimming to prevent their fur from obstructing their vision or getting in the way of their mouths and nostrils. Hair allowed to grow too long can irritate their eyes and nostrils and will result in their faces getting quite sloppy when they eat and drink.

Zuchons, like all animals, should have the outside of their ears cleaned regularly to stave off infection. Nail trimming will also help keep them clean and prevent the overgrowth and damage to your belongings. Many owners like to have their Zuchons professionally groomed in order to maintain their teddy bear appearance.

Zuchons are quite intelligent, and they like to fall in line with their master’s sensibilities. This makes them fairly easy to train in relative terms. As with training any animal, it’s highly recommended to begin encouraging proper behavior at an early age. It’s never too soon to start training your Zuchon.

The best way to train animals is most often through encouraging correct behavior while disapproving negative behavior. Using treats and praise are extremely effective methods for teaching dogs to act in an appropriate manner. Discipline can also be useful but tends to be less effective for most training efforts when compared to reward.

While Zuchons are loving and intelligent, that intelligence can also lead to some stubborn behavior at times. Training a Zuchon will require patience and consistency to ensure lessons are learned well and reinforced often.

Zuchons are a cute, cuddly hybrid of two great family pets. Their small form and desire for company make them great companions on the couch. Zuchons are known to be loving and devoted animals that enjoy spending lots of time with their masters. They are affectionate pets with a strong tendency to follow their owner around the house. They make wonderful additions to any family and their pleasant and obedient disposition makes them a great option for emotional support animals.