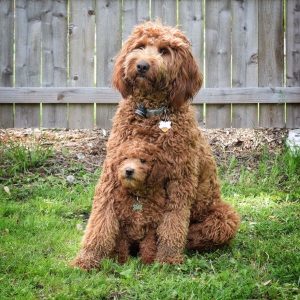 However, their hybrid origins make them less susceptible to health concerns common among purebred animals and they come from a long line of wonderful family dogs which typically results in great family pets.

The Double Doodle is a hybrid combination of three breeds: Golden Retrievers, Poodles, and Labrador Retrievers. Double Doodles are created through the breeding of Goldendoodles (Golden Retriever + Poodle) with Labradoodles (Labrador Retriever + Poodle). Due to their hybrid nature, they have varying physical characteristics depending on their parentage and which one their genetics tend towards.

Double Doodles are medium-sized dogs that stand roughly 20-29 inches and weigh 50-80 pounds when fully grown. Their coat is on the longer side of medium and very dense. They typically have cream, black, brown, or white coloration and have long tails. They generally have brown eyes and a black nose. The appearance of each Double Doodle can vary even among pups of the same litter due to their hybrid origins.

The Double Doodle is another hybrid “designer dog” but this one is actually a hybrid of hybrids. They are a result of the combination of Golden Retrievers, Labrador Retrievers, and Poodles and, as such, owe the history of their lineage to all three ancestries of those breeds. The Double Doodle itself only came into popularity in the past decade while they are reported to have been bred as early as the ‘70s. Hybrid dogs inherit characteristics from their ancestors, so we’ll go into some detail on the direct parents of Double Doodles: Goldendoodles and Labradoodles.

The first known Labradoodle was bred in 1988 by an Australian breeder named Wally Conron. He originally bred this hybrid specifically for the Royal Guide Dog Association of Australia in Victoria. The purpose of the Labradoodle was to combine the intelligence and good nature of Labrador Retrievers with the hypoallergenic coats of Poodles so they could be used as guide dogs for those with allergies. The hybridization was such a success that it started a bit of fervor in North American and Australian breeders to combine Poodles with just about any other breed they could think of.

Goldendoodles were first bred in 1969 by Monica Dickens, the great-granddaughter of famous writer Charles Dickens. They rose to popularity in the ‘90s as a response to the success of the Labradoodles. They were the offspring of purebred Poodles and purebred Golden Retrievers. The resulting hybrid was an attractive and well-tempered animal with many positive characteristics including a low to non-shedding coat.

Both the Goldendoodle and Labradoodle are considered to be incredibly family pets due to their low to non-shedding coats, gentleness, and easygoing nature. Thus, the Double Doodle comes from a long line of loving and even-tempered ancestors.

Double Doodles and their parents are renowned for their gentle nature and how well they get along with children and even strangers. They are known to be extremely calm and patient and are considered great family pets for this very reason. Double Doodles are intelligent and friendly dogs that take well to training efforts. They tend to do well with other dogs and enjoy spending time socializing with family and other animals.

Double Doodles are high energy dogs which like to receive a lot of stimulation. When socialized properly, they do great on walks meeting strangers and other dogs. They love going on trips to dog parks or spending time in the yard with the family. As such, they are not ideal for apartment living as their high levels of energy leave them with a desire for large, open spaces and lots of activities.

Double Doodles are medium-sized dogs with a high level of energy which means they can put away a fair amount of food. It’s recommended to feed a fully-grown Double Doodle roughly 2.5 to 3 cups of dry food daily. The amount of food will vary depending on their age and the overall size of the dog. When kept healthy, Double Doodles have an expected lifespan of 12-15 years.

Thanks to their hybrid nature, they tend to not suffer from the same genetic issues that their purebred ancestors tend to exhibit. Variation in their gene pools helps them to lead healthy lives for the most part. They can sometimes express the genetic deficiencies of their ancestors such as joint issues and digestive diseases. Foods high in fat can exacerbate digestive issues that Poodles are known to suffer from such as pancreatitis and hemorrhagic gastroenteritis.

While treats are a great way to train and reward your dog, you should avoid feeding Double Doodles high-fat meals and table scraps. It’s important to look for food which includes glucosamine to keep them healthy and prevent digestive issues.

Double Doodles are known for being very active with a high energy level. As such, it’s ideal that they have large yards to run around in or being taken on regular outdoor excursions. Double Doodles should get at least an hour of moderate exercise each day and it’s recommended that they walk roughly 14 miles each week. Trips to the dog park will be much appreciated by Double Doodles who have been socialized.

It’s important that all animals get the proper amount of exercise to keep them in tip-top shape. Dogs with high energy levels can be problematic if they don’t get the chance to release that pent-up energy. Behavioral issues and disobedience are common in Double Doodles that don’t get the chance to expend their energy. Regular exercise will keep both the dog and the owner happy and healthy.

The Double Doodle is known for its very dense and longer wiry coat that tends to shed very little if at all. The lack of shedding makes them great dogs to have in the house and a wonderful option for those who are mildly allergic; however, it also means they require regular brushing to prevent knots and matting. Double Doodles should be brushed on a weekly basis to keep their coat clean and tangle free.

Many Double Doodle owners have their dogs professionally groomed to give them their characteristic appearance. Their coats will continue to grow out so occasional grooming is necessary to prevent their hair from obstructing vision or irritating their eyes and nostrils. They should also be bathed with gentle dog shampoos every few weeks. If Double Doodles are bathed too often or with harsh chemicals, their skin can dry out.

It’s also important to clean and check the ears of Double Doodles on a regular basis. Their ears do not drain naturally due to the fact that they have long and floppy ones. It’s important to clean and dry their ears especially after bathing or swimming to prevent infection. Nails and teeth should also be looked after to prevent infection and buildup.

The Double Doodle is famous for their gentle, loving nature and how well they take to training. Their intelligence and desire to please make them obedient dogs when trained properly. They are quick learners and respond well to treats and praise. Rewarding good behavior is the most effective method for training your dog to act properly and respond to commands.

Double Doodles are great family dogs when socialized and trained from an early age. Dogs like to follow someone else’s lead when they can trust whoever is in charge. It’s important to establish your presence as the leader early. Consistency and patience are the two primary keys to forming a strong bond and creating a dutiful companion.

Double Doodles are beautiful and dutiful animals with a gentle, trusting nature. Their love for humans is plain to see and they make for wonderful family pets. They have a high energy level that’s sure to keep up with the kids. They are best suited for owners with a large yard or lots of time for going on walks.

The Double Doodle comes from a long line of trusted doggy ancestors and is sure to curl up into a warm part of your heart if you let it. They can even be a great choice for those who suffer from dog allergies thanks to their Poodle lineage. Their attentive nature and gentle attitude make them great options for emotional support animals, and they are a great addition to any family home.