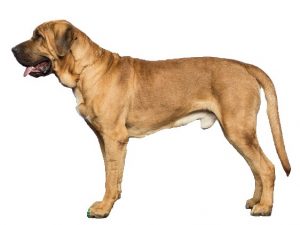 The Broholmer is a large, mastiff-type dog hailing from Denmark. The Broholmer is also sometimes called the Danish Mastiff and they have been used for centuries as family guard dogs. Their massive, squared heads and large form give them an imposing presence which belies their calm and gentle nature.

Broholmers are considered to be great family pets and have been nicknamed in the past as “the butcher’s dog” due to their presence outside butcher shops and use as guard dogs. They are loyal and dutiful animals that will protect their family from strangers and treat their masters with love and respect when trained well.

Broholmers are large and well-muscled animals with an upright, proud bearing. They have an imposing and powerful presence but are rather gentle and calm on the inside. They have a wide head and a deep, broad chest. They stand around 22-30 inches tall at the shoulder and weigh in the range of 90-170 pounds when fully grown. They are considered by some to be the original Great Danes due to their massive size and the fact that they predate the breed known today as the Great Dane.

Broholmers have short, straight coats of an average density. Their undercoats will shed seasonally. They are typically white, brownish red, or black in coloration. They also have amber eyes and black noses. Their faces can sometimes have a black colored mask. They have excess skin around their face and neck that results in loose folds hanging around their head.

Their floppy ears and saggy facial skin give them a relaxed and honest appearance when the Broholmer is at rest. Their large size and impressive musculature combined with their wariness of strangers makes them great guard dogs as their presence alone is likely to ward off any unwanted visitors.

The Broholmers have a long history with their origins dating back as early as the 1500s. They were given as gifts to royalty and European nobles for a number of centuries. Broholmers were used as guard dogs for many wealthy homes and royal families. They were also utilized as herding animals for sheep and would also guard the herds when the shepherds were away or sleeping.

In addition to functioning as guard dogs, Broholmers were also used for hunting. However, hunting methods changed by the 1800s and the prevalence of the Broholmer fell off to the point of near extinction. Luckily, a Danish nobleman by the name of Niels Frederik Sehested took up the cause of returning this proud breed from the brink of extinction and established breeding standards which developed the Broholmer into their characteristic appearance we see today.

The Broholmers were named after Niels Frederik Sehested’s home, Castle Broholm, where they were bred according to strict standards and used to guard the castle and act like companions. They were imported into the United States in the late ‘00s and registered into the American Kennel Club (AKC) in 2013.

Broholmers are alert and even-tempered animals that do well in the company of family. They tend to underestimate their own size and can sometimes attempt to climb on top of their masters. This can result in potential issues when they are around very small children due to their size and weight. Broholmers are great family dogs but it might be best to hold off on getting one until the children are big enough to fend for themselves.

They are gentle and calm with family members but are alert and cautious of strangers. This aspect of their personality makes them great guard dogs but can lead to some issues when it comes to socializing. Broholmers are known for being rather stubborn and require a firm and strong state of mind to master them.

They require more intensive and ongoing training to ensure they don’t begin to think of themselves as the leader in the family. Broholmers don’t do very well with cats or smaller pets typically. As such, they are best suited for single pet homes with masters that can remain consistent and steadfast. Broholmers will keep a close watch on your home and will be a loyal and loving companion if you raise them right.

The Broholmer is a large dog and, as such, requires quite a lot of food on a daily basis. They generally eat about 3 cups of dry dog food a day. They should be fed dog food blends formulated specifically for large breeds to ensure they get the proper nutrition for their body type. Treats are perfectly fine but should be used in moderation to prevent obesity. Specific types of human food are permissible, but you should consult your veterinarian for a complete list of foods that the Broholmer will tolerate well.

They have been bred for their health and robustness which has resulted in them having relatively few chronic health issues. Their large size does make them prone to arthritis later in life and they have some risk of suffering from hip and elbow dysplasia. Overall, they are known to be quite healthy dogs throughout their lifespan of roughly 7-12 years. These animals are strong and sturdy dogs that generally live out the full span of their expected years in health and happiness.

The Broholmer is considered to have an average level of exercise requirement. They are lively dogs with surprising agility for their large size. Broholmers require roughly 45 minutes of moderate exercise a day to ensure they remain in tip-top shape. They enjoy going on walks and playing fetch. They also enjoy having open space in which they can roam freely. Having a large yard or spaces where they can be let off the leash will surely make them happy. Otherwise, it’s advised that you walk with your Broholmer for at least 6 miles throughout the week.

As guard dogs, they are happy to pace along a fence or perimeter and keep an eye on the goings-on around them. They are also happy to sit around with their owners and enjoy relaxing with the family. They don’t require excessive amounts of running to expend their energy and are quite calm and placid dogs in most situations. Broholmers are quite easy to keep satisfied and healthy when it comes to exercising.

Their short, straight coat doesn’t require too much in the way of maintenance. A bath once every few months will help keep them clean and ensure they don’t stink up the house. More frequent bathing is not advised due to the risk of drying out the dog’s skin. Broholmers should also be brushed with the frequency varying depending on the season. Their coat is fairly short and is straight, so it doesn’t require much maintenance or grooming.

Broholmers do constantly shed, however, the amount of shedding varies seasonally which means they may require more brushing during the period of time in which they are actively shedding. Their nails should be trimmed regularly, and this practice should begin at an early age to make sure the Broholmer is accustomed to having its paws handled. The large size of the Broholmer can make grooming a poorly trained one a difficult task indeed.

Broholmers are calm and loyal animals when properly trained. Their gentle demeanor often comes with a stubborn streak that can make training this breed a bit more taxing on the trainer’s patience. However, remaining firm and consistent will go a long way in instilling obedience. It is often the case with Broholmers that training is never truly overdue to their stubbornness and tendency for placing themselves above others.

Treats and praise are wonderful tools for encouraging appropriate behavior and it’s often the case that praise works better than punishment when it comes to training animals. Broholmers respond well to praise but may also need to be put in their place from time to time. This means using a stern voice and refusing to break under pressure. Broholmers are confident animals and so must you also demonstrate confidence and maintain your composure when training these animals.

Broholmers are strong and confident animals who are known to have a calm and friendly demeanor towards their masters. While they can require a fair amount of patience during training, a well trained Broholmer is a wonderful companion and loyal guard dog that will keep your family and home safe for many years. Their proud bearing, alert nature, and natural agility make them great playmates and guardians.

Broholmers are proud animals with a confident bearing that ensures their owners will feel protected with their dog beside them. Their presence provides safety and reassurance to their owners’ thanks to their calm nature and imposing appearance. If trained properly, they could make for great emotional support animals thanks to their sturdy and steadfast nature. Broholmers will be loving and loyal companions their entire life when treated right and trained properly.