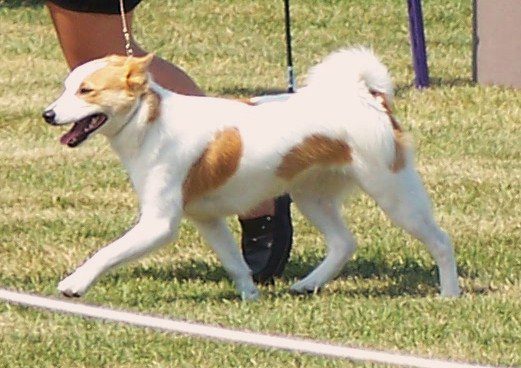 The Norrbottenspets (pronounced nor-BOH-ten-spetz) also goes by Norrbotten Spitz in English and is sometimes called the Nordic Spitz. They owe their name to the region from which they come: the Norrbotten province of Sweden. However, they are also known to have originated from the Lappland area of Finland, thus the more generic name of Nordic Spitz is often attributed to them.

Regardless of what you call them, they are an attractive and fascinating breed of the Spitz family which is known for a thick coat, pointed ears, and wolf-like facial features. The word spitz is German for pointed and refers to the angular nature of their snouts. Spitz dogs also tend to have feathery tails which they carry over their backs in a loose curl. The resulting appearance is cute, alert, and agile.

The Norrbottenspets sports a short, but dense double coat of typically white fur. Norrbottenspets are known to have various markings and patches on their fur that tend to be cream, tan, or red in color. The coat is dense but generally straight and soft to the touch. They are light, medium-sized dog and their bodies are compact but well-muscled. They have relatively large ears that stand straight up and almond-shaped, brown eyes.

Their bearing is alert and agile as befits their heritage as hunting dogs. Once fully grown, Norrbottenspets stand roughly 18 inches tall and the males weigh around 30 pounds. Female Norrbottenspets, on the other hand, tend to be about the same height as their male counterparts but trend towards slighter frames and therefore weighs a bit less (around 24 pounds on average).

As I said before, the Norrbottenspets (sometimes called Nobs) has a fascinating history which dates back to the 17th century. In fact, there was once a time not so long ago when they were believed to be completely extinct!

Originating in the Nordic region, Norrbottens were bred for cold climates and trained as hunting dogs. Their alert and bright nature together with a sturdy frame and loud bark made them ideal allies for driving prey out of their dens. Unlike most hunting dogs which tend to specialize as sight or scent hunters, the Norrbottens use sight, scent, and sound to track animals. They are a rare breed of intelligent and effective hunters.

Norrbottenspets would be released in a wooded area to make use of its sense in the search for game. Once the game is spotted, the dogs would flush out the prey and give chase. They chase the game until it is cornered and begin barking while continuously prancing around the location to confuse the prey and cover the sounds of the approaching hunter.

However, as the fur industry began to decline with prices plummeting after World War II and modern city living lifestyle rose, the need for hunting dogs dropped off. The Norrbottenspitz breed vanished from registrations in the late 50’s and was declared extinct by the Swedish Kennel Club. Luckily, about a decade later, the remnants of this breed were found in use as pets and watchdogs in the North Bothnia area of Sweden.

Norrbottenspets were reintroduced to the Sweden registry and some breeders began dedicating themselves to the rescue of this nearly extinct breed of dog. With news of this effort, others in Finland also began efforts to search out Norrbottenspets in the region and help them broaden their gene pool. Today, their population is in the low thousands with over 150 Norrbottenspets registered in the American Kennel Club with a pedigree of 3 generations.

Norrbottenspets are prized for their working dog traits which are complemented with a gentle and intelligent nature that makes them great pets for families and especially as companions for children. They thoroughly enjoy the company of others and are known for being loyal and energetic. Their energy levels make them ideal for playful families interested in regular activities. Norrbottenspets are also recognized as dogs that play well with other pets.

In addition to being friendly and loyal, Norrbottens are generally considered to be easy going dogs that aren’t prone to anxiety or bossiness. They are also a bit of a free thinker with independent characteristics that come from their history as hunters.

On the slight downside, Norrbottenspets are also known to be quite talkative. Due to their use as hunting dogs in which barking is used as a tool for confusing prey and preventing them from hearing the approach of the hunter, the Nordic Spitz is known to bark often and loudly when bored or distracted. The noise level isn’t ear-shreddingly loud, but it’s certainly not the quietest dog out there either.

Thanks to their heritage as hunting dogs and the concerted efforts of modern breeders to return the Norrbottenspets from the brink of extinction, they are well known for being quite healthy dogs with only a few illnesses for which they have shown a predisposition.

Genetic screening of this newly budding breed has shown some proneness for a genetic condition which affects the brain known as Progressive Cerebellar Ataxia. Dogs with this condition have difficulty with coordination and cap appear to stagger as if drunk. There is no known treatment for this genetic illness and the condition can advance to the point of rendering the animal incapable of feeding themselves or making it to an appropriate place to relieve themselves.

Breeders with the long-term health of the breed in mind are taking steps to ensure proper screening is done on prospective parents ahead of breeding.

The other issue seen with some frequency in Norrbottenspets is hip and elbow dysplasia which can lead to pain and reduced mobility of the dog. This is once again something breeders are actively on the lookout for to prevent the issue from becoming common in the gene pool.

Norrbottenspets are generally healthy dogs with an expected lifespan of 14-17 years. They have no specific nutrition requirements outside of the typical guidelines of what you would feed any similarly sized dog. It is recommended you feed dogs dry food that has supplemental vitamins which are tailored for the age of the animal. Treats are a great tool for training, but excessive treats should be avoided so as to prevent obesity.

Speaking of obesity, Norrbottenspets are not ideal for those who prefer to spend all day on the couch. As was mentioned above, Norrbottens have a medium to high energy level and won’t be satisfied sitting around all day. They require regular, daily exercise and prefer to take advantage of their agile frames with off-lead play.

Regular walks are sure to satisfy the Norrbottenspets’ craving for activity, but they especially enjoy playing games of fetch or chase. Ignoring your Norrbottens’ desire to release some energy may result in excessive barking or the destruction of property. Norrbottenspets are known for their energy as well as their intelligence and as such should be treated to regular outside activities and sport.

The rugged Nordic Spitz sports a thick double coat that is generally straight and short to medium in length. Due to the thickness of their coat, regular brushing is necessary to help remove fur during times of shedding. Nails should also be clipped or ground down to avoid splitting and the Norrbottenspets should have its ears checked and cleaned of any wax buildup to prevent infections from occurring.

Teeth should be checked as with any other dog and brushed in the case of excessive plaque. Norrbottens are known to be virtually free of the typical stinky dog odor and, as such, rarely need bathing. They are quite clean dogs which require only minimal maintenance. That fact combined with their pleasant and loyal demeanor makes them wonderful family pets.

The Norrbottenspets is famous for its use as a hunting companion which means they are highly intelligent and trainable. They are considered loyal and quick learners who respond well to treats and praise though they may sometimes show off a more willful side during training due to their intelligence and independent tendencies.

This independent nature can lead to frustration for many owners during the training process as they can be quite the free thinker at times. That isn’t to say that Norrbottenspets are disobedient dogs by nature, just that they may require a bit of added patience and time when compared to more amenable dog breeds.

Norrbottenspets – An All Around Good Doggo

Norrbottenspets are considered to be courageous and attentive animals. Their fearless attitude combined with a keen mind and kind disposition makes them wonderful additions to any family. They are energetic and affectionate with no extreme characteristics. They show respect and expect to be respected in turn which means they tolerate children well but are known to avoid rude playmates.

Their rarity may make them hard to come by but raising your own Norrbottenspets will mean you’re doing your part to ensure the breed continues to come back from the brink of extinction. This breed is a wonderful dog for hunting and home life and is well worth the effort of adopting if you can find them. They make for a great companion or emotional support animal.