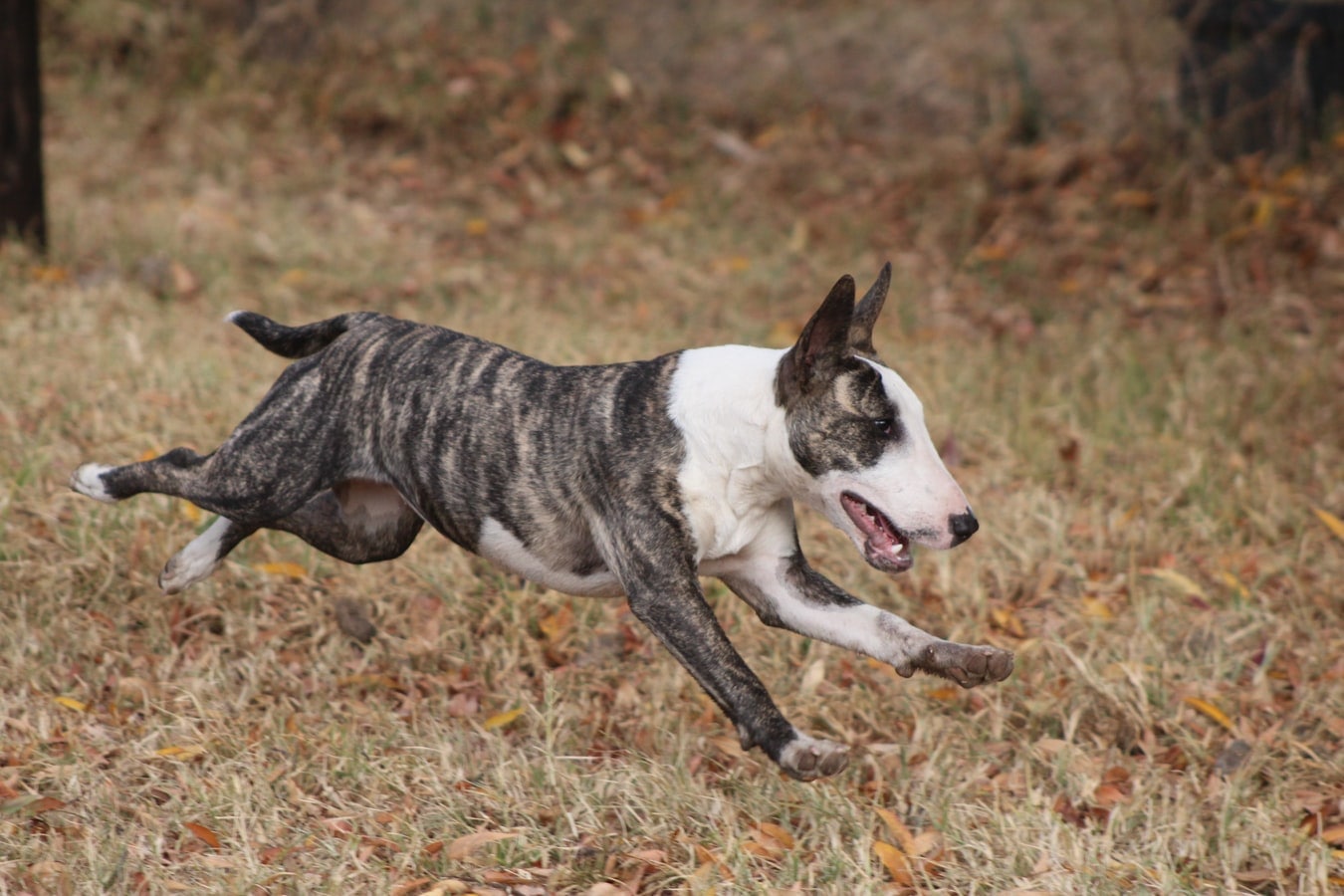 The Miniature Bull Terrier is a vibrant, playful breed that is entertaining and loving. Although they require some care, they are relatively easy to handle and can make life more enjoyable each day. As such, they often make for excellent emotional support animals.

Emotional support animals have continued to rise in popularity in the past decade, as we are becoming increasingly aware as a society of the mental health complications that so many deal with. The fact is that our long-time faithful companions can help provide emotional relief, and having a happy dog by our side can simply make each day more pleasant.

However, it is often difficult to find the right breed to have as your emotional support animal, and it is important to have a type of dog that helps you cope with the anxieties and stressful nature of daily life.

To make an informed decision, there are certain factors that are important to consider. These factors include the loyalty, ease of care and training, and temperament of not only each individual dog, but the characteristic traits of its breed as well. You also may want to consider how often the dog will travel with you, including whether you plan to bring your emotional support animal along with you on day-to-day life.

What is a Miniature Bull Terrier?

The Miniature White Terrier has origins dating back to the 1830s in England, but it was not officially recognized as a breed in England until 1939. The American Kennel Club did not officially recognize the breed until 1991. Despite being a relatively new breed, the Miniature Bull Terrier has quickly gained in popularity over the past several decades.

Miniature Bull Terriers are typically less than 14 inches tall and weigh between 25 and 35 pounds. They are typically primarily white with a secondary color, often black, tan, or grey, and they are well-known for their unique face and narrow eyes. They do not require much grooming but do require love and attention, as they are very responsive to and dependent on affection.

In general, most Miniature Bull Terriers make for excellent pets and are excellent emotional support animals due to their fun and loving personality. They love their owner just as much as their owner loves them, and they can work wonders in cheering up someone who has had a bad day or is feeling anxious.

The Miniature Bull Terrier is especially perfect for those who do not mind a dog that has a mind of their own. While they are loving and for the most part obedient, they do have a reputation of being incredibly playful and finding humor in every situation.

History of the Miniature Bull Terrier

The ancestral Bull Terrier came about in the 1830s in England. Bull Terriers were first used as fighting dogs, and breeders eventually created a variety called Miniature Bull Terriers that were used for hunting rats.

Originally, there were three different types of Bull Terrier breeds, which are the standard, miniature and the toy. The Toy Bull Terrier is essentially non-existent in the modern day, whereas the standard and miniature breeds are rare but becoming more popular each year.

Now that the English Terrier no longer exists, there is a strong lineage of the Dalmation within the modern-day Miniature Bull Terrier. As it stands today, the Miniature Bull Terrier is its own breed—not just a cross defined by its descendancy from its progenitors. This breed has now extended across geographical and political boundaries, and it is found all across the world, including in the United States.

The purpose of the Miniature Bull Terrier has changed significantly throughout the years, and it is rarely used for its initially intended purpose as a hunting dog or ratter. While some still use them to protect their home, they are beginning to become more popular as companions, and many are now using them as emotional support animals, therapy pets and family friends.

The Miniature Bull Terrier has a unique appearance, particularly its facial features that many find to be adorable. It has narrow eyes and a thin forehead, along with ears that are always up and attentive. It also features a strong and stable body, similar to that of a pitbull, although much shorter.

Miniature Bull Terriers vary in colors, although almost all of them have white as their primary color. Many add a mix between white and brown, white and black or white and tan to their attractive white basis.

They also have an incredibly vibrant and upbeat personality, and they add energy to any room they are in. Additionally, they are mischievous and certainly have a mind of their own. Although faithful and loyal, they have a way of getting into trouble from time to time when given enough freedom to do so. Many also characterize the Miniature Bull Terrier as having a strong but often stubbornly consistent sense of humor, which makes them easy to love but also harder to train.

They do require some grooming and a fair amount of exercise. They enjoy the company of others, so they are ideal for those who have enough time to properly care for them and spend time with them. Miniature Bull Terriers require patience during training as their mind often wanders in a million different directions.

What is an ESA?

An emotional support animal (ESA) is an animal—typically a dog or cat—that helps with the symptoms of a mental health disability or complication. They may require special training, and they must be friendly and well-behaved in public places so that they don’t become a distraction to others or cause any damage.

ESAs are often compared to service animals and therapy dogs, although there are some notable differences. Support dogs are typically trained to perform a specific function, such as serving as an aid to those who are visually impaired or blind, and they often go through extensive training. Service dogs, including psychiatric service dogs, are allowed on planes for free regardless of breed where ESAs are not. An emotional support animal is primarily used for emotional and mental relief. ESAs differ from therapy dogs as they have more rights in housing, but they’re also much more strictly regulated.

Anyone who struggles with mental health issues such as anxiety or depression should consider the benefits of an emotional support animal. However, the dog relies upon its owner as much if not more than the person who needs emotional support relies on the dog, so extra care should be taken to ensure that you’re ready to support an ESA.

Like any pet, an emotional support animal has dietary, health, exercise and grooming needs. They may not be a good option if the person must leave the animal by itself for the majority of each day, or if the owner is financially unable to provide the dog with the essential love and care it needs.

Would a Miniature Bull Terrier Be a Good ESA?

Miniature Bull Terriers do not have any special requirements for their diet, and they do well with most high-quality commercial or home-made dog food. It is important to avoid overfeeding, however, as they may be prone to obesity.

Miniature Bull Terriers are not always easy to train. They do have a tendency to get sidetracked, and it is important to remain patient. Although a professional trainer is not necessary in most instances, it is helpful for owners who are pressed for time or for those who required advanced support.

Miniature Bull Terriers are naturally energetic dogs, so they do require thirty minutes to an hour of vigorous exercise each day. However, it is important not to overdo it at a young age to ensure healthy muscle and bone development—if you’re caring for a young Miniature Bull Terrier, ease them into their exercise routine rather than jumping into the deep end on the first day.

They do not require much grooming to keep a clean and healthy coat. Ideally, it is best to give your Miniature Bull Terrier a bath several times each month and brush approximately once a week. No shaving or hair clipping should be required.

Talk to your veterinarian, along with your dog’s breeder, about specific healthcare requirements for your Miniature Bull Terrier. Though they don’t frequently have life-threatening health issues, the breed is known for having frequent minor health problems. In addition to the same routine tests and vaccinations that any dog would need, they should be checked for deafness, knee problems, and a few degenerative diseases that are found in the breed. Despite these risks, Miniature Bull Terriers tend to live relatively long lives, with an average lifespan of about 12 years.

How Can I Register My Dog to Be an ESA?

Emotional support animals do not require special training, so there are multiple breeds that make for good options, including the Miniature Bull Terrier. However, it is essential to register your emotional support animal with a reputable organization. Here at U.S. Service Animals, we offer a thorough and credible registration process, providing our customers with a legitimate ESA letter that is protected by law and accepted by most landlords and other authorities.

Our process starts with filling out a form telling us about yourself and the dog that you would like to register as an ESA. Once we receive and process your application, we set up a meeting with a mental health professional, which is a necessary step in the ESA letter process. After the brief and straightforward interview, we will send you the official ESA letter if the licensed mental health professional agrees that an ESA would be suitable.

To learn more about how to register your dog as an ESA and to get the process started, check out our ESA Registration page, and feel free to contact us if you have any questions or need clarification about the process.