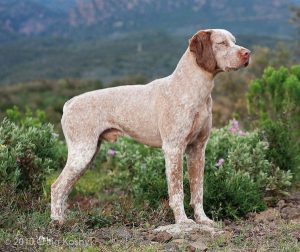 Looking for a loyal dog breed that will be up for travel, hiking, and outdoor fun? The Braque du Bourbonnais is a beautiful and unique breed known for its unrivaled hunting skills, beautiful coat, and dedication to its family.

What Is a Braque du Bourbonnais, Anyway?

An incredibly old breed indeed, the Braque du Bourbonnais is one of France’s oldest pointers. Deriving from a French verb meaning “to aim” or “to point,” the word “braque” as a noun can be translated to mean “pointer.” Mentions of the breed in French literature go as far back as the end of the 16th century, and even then the breed was well known for its profound hunting talents.

Since around the early 1970s, breeders of the Braque du Bourbonnais have both rapidly and substantially improved the conformation and field performance of the breed. While it’s important that the Bourbonnais breed be proficient in the field as a pointer, tracker, and retriever, it’s of equal importance to breeders that they must strive to produce Bourbonnais that conform to a breeding standard.

Following the end of the First World War, the first Club du Braque du Bourbonnais was formed in 1925 by a dedicated group of breeders with the aim of reviving the breed, and bringing the Braque du Bourbonnais back to the prominence it saw pre-war. Despite the considerable progress the club made, along with the first breed standard being published in 1930, the breed was almost completely wiped out once again as a result of the Second World War. Also, due to the strict adherence to the aesthetics of the breeding standard, the resulting Bourbonnais that followed tended to be bred more based on appearance, and were starting to lack in performance. As a consequence of this, breeders started to lose interest, and in the 10 years between 1963 and 1973, not a single Braque du Bourbonnais pup was registered.

In 1982, a new Club du Braque du Bourbonnais formed with official recognition by the French affiliate of the FCI, the Society Centrale Canine (SCC) just a few years later. By now, the goal to revive the breed had been achieved, so the breeding standards were relaxed to allow spots and docked tails, and the hunting instincts of the breed were restored. Both the SCC and the FCI fully recognized the new breeding standard for the Braque du Bourbonnais in 1991.

A medium-sized, short-haired hunting dog, the Braque du Bourbonnais is not overly muscular, however, the breed does have enough musculature to provide the impression of power and strength. With supple skin and a robust, stucky build, the Bourbonnais coat is short and dense, being fine and straight in texture, however slightly coarser and longer on the back, while the hair around the head and the ears is somewhat shorter and finer.

The Braque du Bourbonnais starts with a base color of white with either fawn or brown ticking throughout. This coloring was once known as peach blossom or wine dregs. Generally speaking, the ears will be the same color as the ticking on the body to a lesser extent.

Roan refers to an even mix of white and colored hairs on the body with solid colors on the head, tail, and legs. Roaning is acceptable and it isn’t penalized by the official club standards but it’s still not in favor.

A Braque du Bourbonnais stands up to 22 inches high at the shoulder and weighs anywhere from 35 to 55 pounds.

As it’s been bred almost exclusively as a working dog, the Braque du Bourbonnais has exactly the kind of temperament you would expect from a hunter’s companion. Known to be highly affectionate and devoted to their family, the Bourbonnais breed wants nothing more than to be in the constant presence of their humans. If kept confined in a kennel or left home alone for too long, a Braque du Bourbonnais dog won’t do well. This breed is prone to severe separation anxiety when left alone for long periods of time on a regular basis. Most Braque du Bourbonnais get on very well with children and become incredibly attached when they’ve had the chance to socialize.

Considered to be a highly trainable and very intelligent breed, the Braque du Bourbonnais is very eager to please and capable of learning quickly, while also being neither challenging nor dormant. Training methods that emphasize rewards can be much more effective than more aggressive correction methods, as this can cause a Braque du Bourbonnais to become nervous and fearful. The breed is also pretty good at being able to train itself as they can instinctively locate, point toward, and retrieve game, even if they haven’t been taught to do this.

Tips for Finding and Buying a Braque du Bourbonnais

Due to this breed’s unique reputation and history, it can be difficult to find a quality breeder — especially outside of France.

Due to their rarity, most prospective buyers have to be prepared to embark on a little traveling to bring home a Braque du Bourbonnais. You should be able to find a dedicated Braque du Bourbonnais breeder in the United States with a bit research, however. When choosing a breeder, ask yourself the following:

Before adopting a Braque du Bourbonnais, make sure you consider the long-term costs of owning this breed. Price is always going to be a major factor to consider with any breed of dog and the Bourbonnais can be a pricey dog — especially in terms of the upfront cost.

Does the Braque du Bourbonnais Have Any Health Problems?

While the Braque du Bourbonnais breed, for the most part, is a very healthy dog, especially compared to other pure breeds, with a fairly long life expectancy of 12 to 15 years, there are still several health problems which owners and breeders may be concerned about.

Conditions such as hip dysplasia, entropion, and ectropion are some of the most common issues thought to affect the Bourbonnais breed, along with with pulmonary stenosis, a heart issue that can be serious and life-threatening.

The following is a list of health issues most common among Braque du Bourbonnais dogs and other French pointers:

Whether you just want someone to snuggle on the couch late at night or someone to keep you company when traveling, a Braque du Bourbonnais will, above all else, just be happy to be by your side.

Planning to adopt a Braque du Bourbonnais as a new emotional support animal or service animal? You’re in for years of companionship, loyalty, and adventure. Just make sure you register your Bourbonnais as an ESA or service animal! At US Service Animals, we take pride in our fast, easy ESA registration process which includes an ID and certificate for your pet and inclusion in our national database.