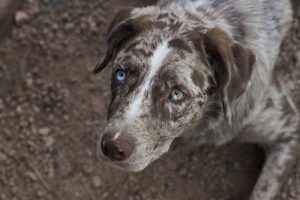 They are loving and loyal and are known to be particularly protective of children. They are one of the oldest tree dog breeds in the United States and have a keen sense of smell which they can use to track prey for miles. American Leopard Hounds are hardy animals and capable of surviving in extremely hot and cold weather. They are sociable, energetic, and intelligent animals who love to run through the wilds with their masters.

The American Leopard Hound is a medium to large dog that stands roughly 21-27 inches tall and weighs in at 35-70 pounds when fully grown. They have an alert and upright bearing with long, lithe limbs. Their snouts are long and broad relative to the rest of their face. They have long, floppy ears and their eyes are typically blue, brown, or amber.

The American Leopard Hound’s appearance can vary widely due to the fact that they were bred for ability and not appearance. They have short, dense coats which can be a solid color or be splotched with a merle pattern. They come in a large variety of colors such as red, blue, brindle, black, gray, and yellow. They have long, powerful legs and tough feet ideal for running through uneven terrain for many miles. Their noses can be brown or black and their eyes are rounded with a wide set.

American Leopard Hounds have the appearance of an animal ready to spring to action at any moment. Their lean yet powerful frames are capable of trailing prey and spending long days in the wild.

The American Leopard Hound was originally registered in 1960 with the breed name of American Leopard Cur. This name was changed to their current name in May of 2008. Their exact origin as far as ancestry goes is a topic of debate. Most researchers seem to think these dogs came from the mixing of Mexican dogs with Spanish conquistador hunting breeds. The other primary theory is that the breed originates in the United States itself and was a mixture of many different hounds and herding breeds from all over Europe such as Spain, France, England, Ireland, and Scotland.

Regardless of their exact origin, the American Leopard Hound had become an established breed in eastern North Carolina by the early 1700s. They were then spread westward to Kentucky, Tennessee, Texas, and Oklahoma during this time and used primarily as hunting dogs. They were used to hunt all sorts of game such as boar, raccoons, bobcats, cougars, and even bears.

American Leopard Hounds are considered tree dogs because they would be used to hunt animals which prefer to go up trees when pursued. The dogs will corner animals and back them up trees and then attempt to keep them there while their human hunting companion caught up to finish the prey off. American Leopard Hounds were especially good at hunting thanks to their agile form and intelligent nature which would allow them to corner prey without coming to harm. They did this thanks to their astounding ability to “duck and dodge” and keep out of harm’s reach while still remaining close enough to prevent the prey’s retreat.

The American Leopard Hound is an energetic, sociable, and highly intelligent animal. They are known to be highly trainable thanks to their desire to please their owners combined with their high intelligence. They are loving and affectionate dogs that form strong bonds with their masters and are known to go to great lengths to please their family. They are also known for being extremely affectionate towards children and become protective of them.

American Leopard Hounds are known to get along well with other dogs and animals. However, they have a long history of being used as hunting dogs, so they are likely to give chase to smaller animals. This behavior can be unlearned through training but could cause problems initially for owners with multiple pets.

American Leopard Hounds also take a cue from other hounds and are capable of quite loud vocalization. This is another trait that comes from their hunting past. If left alone for long, they are liable to start baying and barking loudly which could cause trouble with the neighbors. The high prey drive of the American Leopard Hound could also result in escape attempts if you leave them in an unsecured area with nothing to do and they spot another animal passing by.

The American Leopard Hound is a very sturdy animal which has a long history of being bred for its physical vigor and sturdy nature. Thus, this breed does not have much in the way of common illnesses from which it suffers. They have an average life expectancy of 12-15 healthy years. They have healthy gene pools with the only exception being when two merle patterned dogs are bred together. This can result in the passing on of recessive genes which are linked with hearing and sight problems.

They have a moderately high energy level and with that quite the appetite. Roughly 3 cups of dry food is recommended for daily consumption. Treats are great tools for aiding in training by rewarding positive behavior, but make sure not to overdo it. American Leopard Hounds have lithe forms and should appear quite svelte when kept at a healthy weight. Overfeeding can result in obesity which can cause more health issues down the road and result in a shorter lifespan.

As mentioned above, the American Leopard Hound has a long history of being used as a hunting dog and running about in the wilds of North America. As such, their activity level is on the upper side of average. They are fantastic companions for those who like to experience the great outdoors or go on regular jogs or hikes. If you aren’t up for regular exercise, having a large, fenced-in yard for the dog to run around in is highly recommended.

Energetic dogs, when cooped up in small spaces and not allowed to work out their energy, can become anxious, disobedient, and troublesome. It’s recommended that the American Leopard Hound gets at least an hour of moderate exercise each day and gets to walk roughly 10 miles per week. Behavioral problems with these dogs is often a result of too little exercise or a lack of structure and training.

The American Leopard Hound has a short and dense coat of straight hair which requires little in the way of grooming. An occasional brushing will keep down the amount of shed hair floating around the home. They shed seasonally, so sometimes may be worse than others in regard to shedding. American Leopard Hounds should only be bathed when they are especially dirty or stinky to avoid drying out their skin.

It’s important to take care of your animal’s nails and ears on a regular basis to avoid infection. Their long ears can build up dirt and moisture and should be cleaned to help prevent infection from occurring. Nails should be clipped and cleaned every few weeks as well.

The American Leopard Hound is especially responsive to training thanks to their intelligent nature and high desire to please their masters. They are alert and focused and are known to be on the easier side for training purposes. They use eye contact to communicate with their masters and will be very responsive to your needs and orders when trained properly. Rewarding with treats and praise will go a long way with this animal who loves to see its masters happy.

American Leopard Hounds can also be a little independent at times, so it’s important to establish yourself as the alpha to ensure your commands don’t go ignored. Training an animal is an ongoing process that requires consistency and constant reinforcement, but the American Leopard Hound is a particularly attentive animal with a strong desire to please which should make their training go quite smoothly.

The American Leopard Hound is a loving and alert animal with a good nature and a strong desire to please its master. They are especially affectionate towards children and can become very protective. They have a long history of being bred for hunting which gives them a strong and agile frame and high levels of intelligence. Their presence is comforting and reassuring and they could make for a great emotional support animal thanks to their highly trainable nature and desire to please.