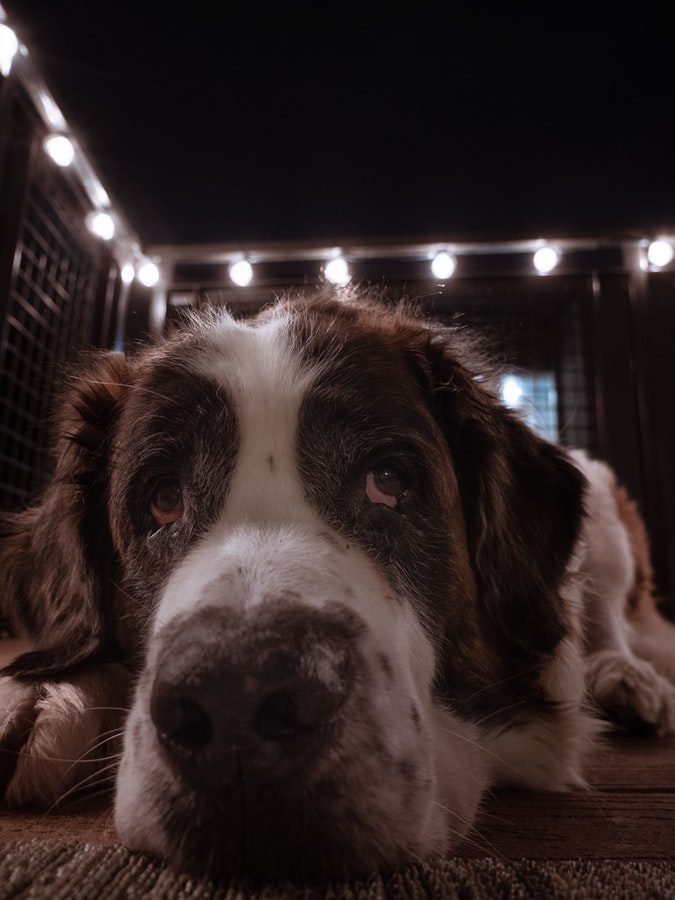 They are your companion, best friend, and source of unconditional love. Your choice of them should depend on specific traits that will fit your lifestyle. This is true if you are looking for an excellent, large, athletic and robust guard dog that’s protective of its own, and good with children. If you are looking for a fearless dog that’s steady and confident while remaining lovable, easygoing, affectionate, devoted, and docile, you are describing a Spanish Mastiff.

Spanish Mastiff is an astute watchdog that will growl loudly at the first sign of a threat. Do you want a calm and noble dog that’s always alert and watchful that can respond remarkably fast when duty demands it? If you want a huge guard dog that isn’t troublesome but can attack when an intruder doesn’t retreat, join me as we examine the Spanish Mastiff Breed.

The Spanish Mastiff is a pedigree working dog that has historically been used as a livestock guardian. Its calm, loving, and protective nature make this gentle giant a perfect guard dog or family pet. The dog, being an old breed, has been called by several names over the years. The Mastín Español and Mastín de España are two of the more familiar names.

Spanish Mastiffs have big bodies but don’t bark a lot. The seemingly lazy creatures are unsuitable for apartment living. They are a perfect fit for single owners or families but aren’t recommended for first-time dog owners. Despite their seemingly docile nature, they are strong-willed and require firm training from a strong-willed person. Because of their strong personality, they can easily see firm leadership or lack of it and can put you to the test. Go for the Spanish Mastiff if you want a noble, strong, and confident dog that will protect your home no matter what.

Deriving from Estremadura in Spain, Mastins were bred as livestock guards.  Their origin is traced to the Molosser dog of 2000 BC. The dogs were most likely brought to the Iberian Peninsula from India and Syria by Phoenician and Greek traders, where they have lived for thousands of years and regularly featured in 20th-century dog shows.

The breed is popular in Spain, comparable to what the Labrador Retriever is in the United States. As a livestock guardian, the Mastin’s mostly white coat enabled him to blend perfectly with the sheep, making it easy for keepers to differentiate him from predators like wolves. As per the medieval Spanish Shepherd’s Association, Mesta, the Spanish Mastiff’s most significant value has been its ability to keep flocks safe from wolves since the 1400s.

Archives dating back to 1526 show that up to 3.5 million Merino sheep roamed all over Spain with Spanish Mastiffs as their companions. Spaniards are believed to have used these dogs every time they fought native people they intended to conquer. Their significant size and sheer power are intimidating enough, but it’s their training in protection, and the ability to attack when commanded which made them truly excellent allies in war.

The Spanish Mastiff featured prominently in 20th-century European dog shows, but official breed standards were only set down in 1946. Mastins still appear in Spanish dog shows, especially in the Iberian Peninsula. It’s estimated that about 24,000 Spanish Mastiffs remain in Spain, where they are the country’s officially recognized national dog breed.

The Spanish Mastiff is a large breed featuring a massive chest, long legs, and body. The well-muscled and heavy-boned dog differs in weight depending on whether it’s male or female. The males weigh 150 and 220 pounds while the females average anywhere between 140 and 170 pounds, with the average dog standing at 26 to 35 inches at the shoulder.

The Mastin has a substantial head with strong jaws, loose lips, and a thick muzzle with a thick neck that has a dewlap. They have a short and dense double coat that gives them a wooly appearance. His topcoat is a harsher texture. They have a loose-fitting skin with an undercoat that feels less wooly but softer than the topcoat.

The Spanish Mastiff is predominantly white, but you will find a few others in fawn, black, brindle, yellow, red, and wolf sable.  They have small round dark eyes and triangular-shaped hanging ears.  Their nose is black similar to the pigmentation on his eye rims and lips.

The Spanish Mastiff is a characteristic livestock guard dog with a moderate activity level. He prefers to sit back and watch before engaging in a new activity. They are generally wary of strangers, whether they are human or animal.  Once your dog bonds with your family, they’ll follow them almost everywhere and protect them with their own life.

They require repeated training during their entire life to make sure they comprehend their role. You can offer continual training even though you are not an expert. However, unless you become a clear pack leader, the independent-minded Spanish Mastiff will attempt to take the leadership position and refuse to accept your orders.

Don’t be misled by the Mastin’s appearance of slothfulness and laziness; he is an agile dog whose quick reaction can surprise you. They bond well with children, but you must remind your kids to respect their space. They get along with other pets that they are familiar with, but you must always keep an eye on them when they’re around new and unfamiliar dogs.

The Spanish Mastin is an intelligent breed capable of solving problems and making their own decisions. This smart dog is a fast learner, but it isn’t easy to breed and train to obedience if you are a meek owner. To succeed with their training, present yourself with a stern but calm authority, or you will encounter the dog’s “selective deafness tendency” where they responds slowly or on their own terms to those things they don’t like.

The Spanish Mastiff can show a level of aggression towards other dogs.  You can avoid this by socializing them from early puppyhood with different types of dogs. Initial training prevents the development of defensive or confrontational behaviors. The Mastin is an intelligent breed, and given the correct training, they can achieve the highest possible standard.  Expect dominance issues when they are with dogs of the same sex.

Correct socialization makes the Mastin gentle and patient with kids primarily when they are raised together. However, take care of younger children as they’re likely to knock them over because he’s so big. Teaching children how to approach and touch the Spanish Mastiff appropriately will enable them to coexist peacefully.

The Spanish Mastiff is a highly independent dog. They need an experienced, firm, and steady trainer, or else they will happily ignore commands. Regarding livestock guarding and herding, this breed needs little direction to instinctively master how to perform those duties from a young age. You may never guarantee that a dog will be 100 percent safe, but proper training and socialization helps a great deal.

Living with a Spanish Mastiff

The Mastin has to be well trained and socialized for you to enjoy their calm and stable nature. Use an experienced trainer at the beginning. After that, use a combination of consistency, confidence, firmness, and patience to manage them. Matters can quickly get out of control if you allow the slightest inclination towards disobedience.  Socialization must be an ongoing process so they can learn appropriate responses to different situations, sounds, people, places, and animals.

The Spanish Mastiff is not the Usain Bolt of the world of canines, thanks to their “laziness.” However, he will do well with long daily walks in the outdoors as much as possible. They are quite playful when young but become unwilling as they mature and grows older. Left on their own, they would rather lumber around. One or two daily walks, along with some playful moments with you, for a safe off-leash time, keep them healthy and happy.

A predominantly livestock guardian dog, a Mastin isn’t your typical city dog and thrives well in a rural setting. If you are a city dweller, you are better off living in a sizeable compound with a well-fenced yard where they can have some space.  Their coat enables them to handle any form of weather from hot to biting cold; You can take them out whatever the weather condition though they love it dry rather than wet.

When it comes to grooming, the Spanish Mastiff requires average to above-average attention. They shed slowly, meaning he needs daily brushing. This translates to having lots of fur to clean up around the home. The Mastin drools and slobbers, so you need to wipe their face on an almost daily basis.

Bathe them only occasionally using the correct dog shampoo to avoid depleting the natural oils on their skin. Their plus size makes bathing the dog an arduous task. Save the exercise for a sunny day in your yard and have a hose handy. The alternative is to contact local groomers that have giant dog bathing facilities.

The Spanish Mastiff’s other grooming needs are regular cleaning and looking after their teeth, nails, and ears. Use a cotton ball and dog ear cleaning solution or a damp cloth to wipe their ears once a week. While at it, examine them for wax, signs of infection, or a bad smell, without pushing anything down their ears.

Their teeth need brushing using toothpaste and a right dog toothbrush at least three times every week. Trim their nails on your own when the need arises or take them to a vet or professional groomer. Unless you know something about dog nails, don’t tamper with them since they are not like yours. The lower section of a dog’s nails have a network of nerves and blood vessels, and cutting them can damage them or cause bleeding.

The Spanish Mastiff has a relatively good lifespan averaging 10 to 12 years. The breed enjoys reasonably good health save for a few issues that are common with large-breed dogs. The most common health problems consist of musculoskeletal issues such as hip dysplasia and elbow dysplasia.

Take care not to allow your dog to grow too fast as a puppy as this leads to panosteisis or growing pains. Fast growth also predisposes the Mastin to other musculoskeletal challenges later in life. The leading life-threatening health challenges affecting the breed include breathing problems, heart problems, and entropion.

Like all other large-breed dogs, offer the Spanish Mastiff the best diet that’s specially formulated for its size. You may want to select an active breed formula for a dog that’s particularly active to ensure you are meeting his daily energy needs. Feed Mastin puppies on large-breed puppy formula to prevent them from growing too quickly.

Is The Spanish Mastiff Your Kind of Dog?

Owning and raising a puppy takes a considerable effort, and it’s worth every moment. When it comes to a giant breed dog like the Spanish Mastiff, you can expect additional responsibilities. Work should begin during early puppyhood to ensure the dog doesn’t grow too quickly as it puts a strain on their bones, joints, and muscles.

If you choose a Spanish Mastiff, you must get prepared to take care of a dog that can weigh as much as a fully grown man. This breed enjoys being close to and spending time with family. If adequately socialized, they will be kind and gentle even with strangers but can be aggressive if provoked unnecessarily.

The Spanish Mastiff may appear to be independent and stubborn, but they form a powerful bond of loyalty with their human friends and family. They are endowed with a natural protective instinct and will not hesitate to protect their master. They may appear lazy but can pick up good speed when the need arises.

The Spanish Mastiff have a majestic and dignified demeanor and is on the watch even when you think that it isn’t. They are willful by nature, but their size makes them a potential risk.  Supervise their interaction with children even though they get along with them.