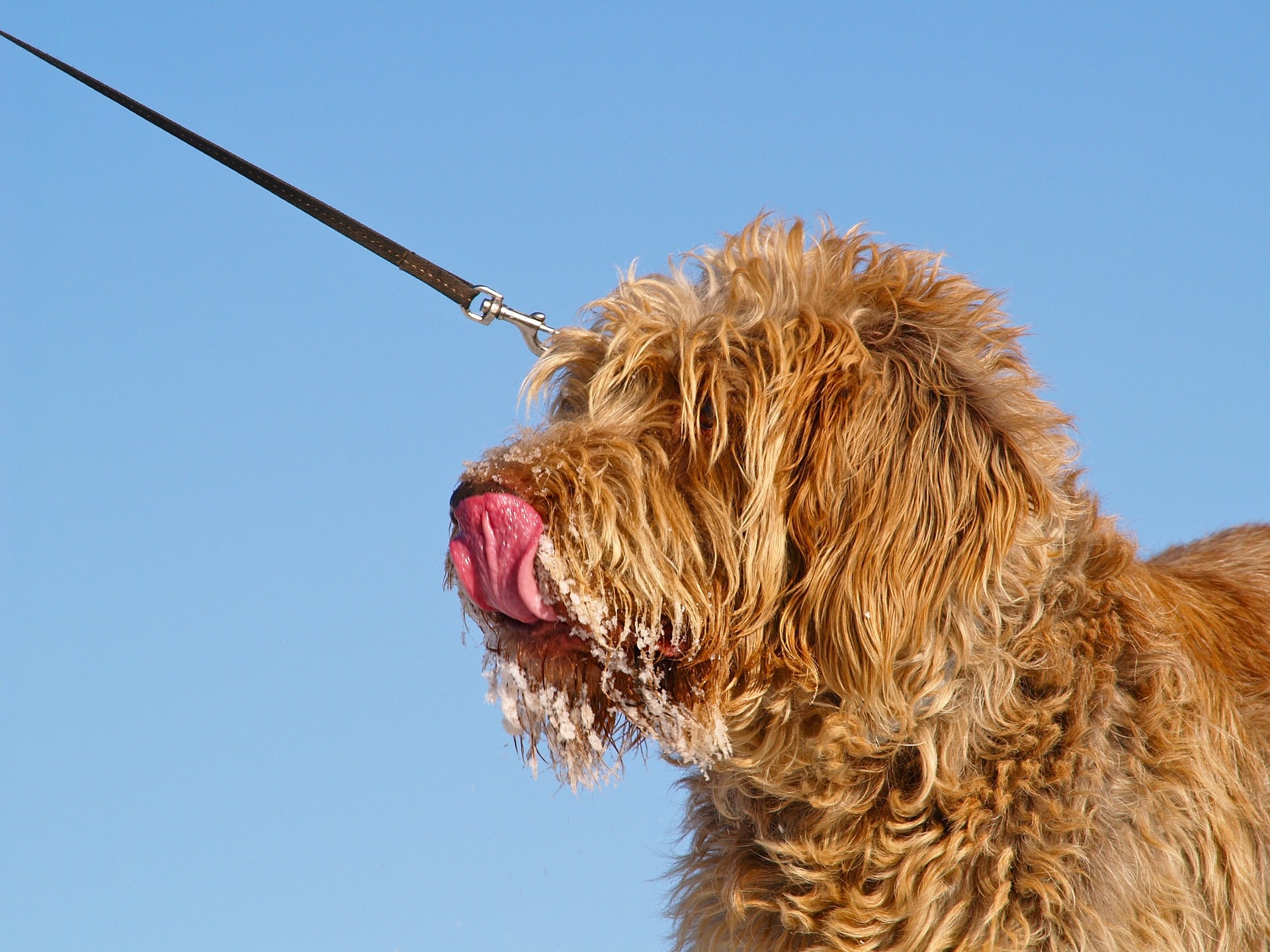 The Spinone Italiano is a classic dog breed that may be relatively unknown to the average dog owner. Nonetheless, this Italian dog breed has a long history and has served as a loyal companion and servant to European royalty throughout the years. Today, the Spinone Italiano is still used as a professional or recreational gun dog, though it also makes for a great house pet.

But what exactly is a Spinone Italiano? And what makes them such great pets and hunting dogs? Let’s take a look at where Spinone Italiano came from, their traits, and their official recognition as a breed to get a better understanding of what makes such an attractive option for anyone looking for a hunting dog, sport dog, or loveable family pet.

What is a Spinone Italiano?

The Spinone Italiano is a medium-sized dog breed. It generally has short, wiry fur that is either white or cream colored. The Spinone Italiano was originally bred to be a hunting dog, so it maintains many of the same features and traits of other hunting breeds. Depending on the coloration, Spinone Italianos can also bear a striking resemblance to German Wirehaired Pointers.

Though it originated in Europe, the Spinone Italiano has since spread to other parts of the world. The breed is a popular house pet due to its friendly nature, agility, and easy-going low-maintenance lifestyle—as long as the dog gets enough exercise.

History of the Spinone Italiano

Where Did Spinone Italianos Originate?

As the name implies, the Spinone Italiano breed most likely hails from Italy. Some historians claim that the breed can be traced as far back as 500 BC. However, the Spinone Italiano’s earliest days are somewhat unclear. The breed was believed to have originated in the Piedmont region of Italy, though some speculate that it could have existed in other European countries prior to its appearance in northern Italy.

Is the Spinone Italiano a Recognized Breed?

Unlike other breeds that have been in existence for centuries, the Spinone Italiano was not recognized as an official breed by the American Kennel Club until 2000. This is likely due to the fact that the breed almost went extinct during World War II, though its numbers have since recovered. In any case, the Spinone Italiano does meet the standards to be a purebred. But what exactly are the criteria that must be met to be considered a standardized breed?

Breed standards are subjective descriptions of standards described by the American Kennel Club, that actually tend to change over time. The official definition of a Spinone Italiano or any other breed isn’t set in stone, but changes and develops over time as new characteristics emerge in the breed. This wiggle room is what makes dog shows so popular—without a set-in-stone interpretation of the “perfect” Spinone Italiano, judging which dogs best exemplify the breed’s standards can be a complicated task.

The Spinone Italiano is a recognized purebred in the “Sporting Group,” a grouping of dogs defined by the American Kennel Club as “naturally active and alert, Sporting dogs make likeable, well-rounded companions.” They go on to say that the group was “first developed to work closely with hunters to locate and/or retrieve quarry,” and split it between four categories: “spaniels, pointers, retrievers and setters.” The AKC also defines their typical personalities, though there will be a lot of variation here: they’re “known for their superior instincts in water and woods, many of these breeds enjoy hunting and other field activities.” This is due to their water-repellant coats, which make swimming and being out in the elements alike more enjoyable—though some spoiled Spinone Italianos can be just as fussy as any other kind of dog.

What Are the Physical Characteristics of the Spinone Italiano Breed?

The Spinone Italiano is a mid-sized dog with a large dog’s personality, standing about two to two and a half feet tall on average. Your average Spinone Italiano should weigh somewhere between 60 and 80 pounds. Domestic pets will likely weigh more than dogs that are regularly used for hunting, but domestic pets are often overweight—so make sure that you give your Spinone Italiano proper exercise if you notice that they’re getting a little bit bigger than they should be.

In terms of color, there isn’t very much variation among typical Spinone Italiano purebreds. Most Spinone Italianos are white or cream, with some brown or orange spots. Like most hunting dogs, Spinone Italianos have short, wiry fur that is not likely to get caught on branches or dense brush. Even in dog shows, Spinone Italinaos are made to look somewhat “ungroomed,” with varying lengths of fur and almost no undercoat.

Well-built and strong, this breed has long limbs (relative to its body size) and large, webbed paws. Though Spinone Italianos have naturally long, thick tails, these are usually cropped (especially if they are used for hunting). This breed also has large, floppy ears (similar to many Spaniels), though these are never cropped.

What Traits Is the Spinone Italiano Breed Known For?

Spinone Italianos have the same traits as any good hunting dog: alertness, intelligence, loyalty, and energy. When they’re not tracking down wild game, the Spinone Italiano loves to run, jump, and play—so make sure you give them the chance to do that in the right place at the right time, otherwise they can be a handful. The Spinone Italiano generally responds very well to training, and an enthusiastic trainer should have no problems teaching the breed both basic and advanced commands. They are also friendly and generally safe for families and children, so they are ideal house pets as well.

Like many dog breeds, Spinone Italianos bond very closely with their owners, often to the exclusion of other people and animals. If you wish to have a Spinone Italiano as a pet, it is recommended that you allow them to meet as many people and animals early in life, so that they gain a happy familiarity with strangers rather than a wary defensiveness. This is especially true any smaller animals, especially other pets, as a Spinone Italiano may mistake a small cat or dog as wild game, triggering their natural hunting instincts.

Spinone Italianos are very friendly and social, so they are not ideal as guard dogs (though they could do it serviceably with enough training). This breed is more likely to want to play with strangers, so they are less likely to alert their owners in the event of a break-in. Additionally, due to their hunting instincts, Spinone Italianos are a relatively quiet breed and do not bark unless provoked.

While Spinone Italianos do need a fair amount of exercise, they are generally considered a “low-maintenance” animal. For example, beyond regular bathing, Spinone Italianos have very few grooming requirements. While some dogs of this breed shed, they are short-haired, meaning that you do not need to take them to the groomers as often as many other breeds.

Nonetheless, Spinone Italianos are not recommended for those who don’t have the time or energy to regular exercise them. While the breed can make is an excellent long-term companion, due to their high levels of energy they may not be suitable for the elderly, the physically disabled, or anyone else that is unable to commit to over an hour of intense exercise each and every day.

Though using dogs to hunt wild game is not as common as it once was, the Spinone Italiano has found a new purpose as a sport dog for its speed, energy, and agility. Many Spinone Italiano owners are putting their pets in sports competitions to take advantage of the breed’s natural abilities. Spinone Italianos should only compete in these strenuous activies when they’re young and healthy, however, lest they wear their bodies out prematurely and suffer from a host of medical issues later in life.

What Are Some Common Health Problems for the Spinone Italiano?

Since the Spinone Italiano is a very active breed, it should be fed a high-calorie diet and might need to eat more than you might expect based on its size. As always, dry foods designed for high-energy dogs are a good basis, but make sure that you tailor the dog’s diet to its age, lifestyle, and size.

For the most part, Spinone Italianos don’t have too many serious medical problems. Due to their roots in hunting, the breed is inherently strong and resistant to the elements. However, like any breed, they can still run into certain health issues.

Spinone Italianos often end up suffering from poorly functioning hip sockets, a common ailment known as hip dysplasia. This is normally due to excessive running and a generally active lifestyle, but often is just an inevitable result of aging and a bit of bad luck. Over time, this often leads to decreased movement and painful arthritis. In some cases, dogs may even lose the use of their back legs and require surgery or special equipment to regain mobility. Spinone Italianos generally cannot work as hunting dogs beyond 12 years of age, often due to issues like these

Another health issue that affects some dogs of this breed is gastric torsion. In essence, the stomach gets rotated due to excessive gas. While the number of Spinone Italianos with this issue is relatively small, it can be life-threatening.

Thankfully, most serious health problems are uncommon for this breed. Spinone Italianos usually live between 12 to 14 years, and a well-taken-care-of member of the breed should remain happy and healthy for most of their life.

Can a Spinone Italiano Be a Service Animal?

The term “service animal” is thrown around a lot these days, but it actually has a strict legal definition. The bodies that govern its usage, the AVMA and the Americans with Disabilities Act, use it to mean “any dog that is individually trained to do work or perform tasks for the benefit of an individual with a disability, including a physical, sensory, psychiatric, intellectual, or other mental disability.” As an incredibly intelligent, active, and trainable dog, the Spinone Italiano is very well suited for a number of tasks that require fairly complex physical assistance.

Not only are they very practically helpful companion service animals, but because of their lovable nature and tendency to bond very strongly, a Spinone Italiano can serve as a wonderfully helpful emotional support dog. It may not be the first breed that comes to mind when you think about a loving, supportive companion, but that’s more for a lack of mainstream popularity than it is a result of any lack of suitability.

“Therapy dog” is another category that people often confuse with service dogs and emotional support animals. In casual conversation you might take them to mean roughly the same thing, but according to regulatory authorities they are completely separate. The barrier of entry to call a dog a service animal or emotional support animal is very high, and comes with many legal restrictions, but a more general therapy dog is essentially any dog that provides therapeutic services.

Just as they make excellent ADA-approved working dogs, the Spinone Italiano can provide effective therapy. When well-trained, the breed is friendly, playful, and kind—not to mention adorable—making them the perfect candidate for lifting the spirits of people everywhere.

For more information on registering a Spinone Italiano as a service animal or emotional support animal, consult usserviceanimals.org today!