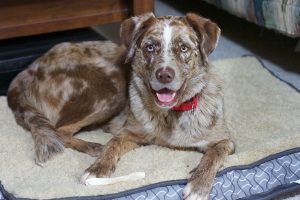 Where Did Texas Heelers Originate?

Breeders in the United States wanted to bring these Australian herding dogs to Texas, and thus began the crossbreeding process, resulting in the Texas Heeler. Cattle ranchers in Texas were in dire need of dogs that carried certain traits. Specifically, they wanted dogs that had the natural instincts to herd sheep and cattle effectively. Thus, the Texas Heeler was born.

It is unclear when exactly this crossbreeding process took place, though records show the first registered Texas Heelers showing up sometime in the early 1970s. Also referred to as the Queensland Heeler or the Blue Heeler, the Texas Heeler is a breed whose origins are shrouded in mystery. Nonetheless, the breed lives on today, as both a working dog and a house pet.

Is Texas Heeler a Recognized Breed?

However, since the Texas Heeler is a crossbreed and does not descend from a purebred ancestor, there are no major kennel clubs that recognize it as a standardized breed. While the Texas Heeler is considered a crossbreed and has well-defined characteristics, it does not meet the standard that purebreds must meet. But what exactly are the criteria that must be met to be considered a standardized breed?

Breed standards are set by the Kennel Club and are subject to change from time to time. Generally, breed standards are simply descriptions and are therefore somewhat open to interpretation. This is why dog shows are so popular, as they allow judges to decide how well individual dogs meet the criteria for their given group or category.

While the Texas Heeler is not recognized as a standardized breed, the breeds that it comes from are both recognized. The Australian Cattle Dog and the Australian Shepherd are both part of the “Pastoral” breed group. According to the Kennel Club, this group is defined as follows:

“The Pastoral Group consists of herding dogs that are associated with working cattle, sheep, reindeer and other cloven footed animals. Usually, this type of dog has a weatherproof double coat to protect it from the elements when working in severe conditions. Breeds such as the Collie family, Old English Sheepdogs, and Samoyeds who have been herding reindeer for centuries are but a few included in this group.”

Since the Kennel Club’s definitions are subject to change from time to time, and new breeds can always be admitted into a given category, there is a chance that the Texas Heeler will one day be recognized as a standardized breed in the Pastoral Group.

What Are the Physical Characteristics of the Breed?

Other interesting characteristics of the Texas Heeler include the ears and the tail. While not always the case, most Texas Heeler’s are born with bobbed tails. Since this does not happen with every Texas Heeler, it is not a defining trait of the breed. However, their ears are more recognizable. As puppies, Texas Heelers usually have floppy ears. A few weeks after their birth, the ears will suddenly perk up and become straight and pointy. The ears will stay this way for the remainder of their lives.

What Traits Is the Breed Known For?

Texas Heelers are extremely active and intelligent. This is part of what makes them great for both herding and home protection. The Texas Heeler generally responds very well to training and is eager to learn new commands. They do have natural herding instincts, so they are perfect for a farm setting. However, they are also friendly and generally safe for families and children, so they are ideal house pets as well.

Like many dog breeds, Texas Heelers are very loyal and protective of their owners. If you wish to have a Texas Heeler as a pet, it is recommended that you socialize them with other animals early, so that they don’t become defensive or aggressive in response to animals later in life.

This breed is great for protecting the home, as Texas Heelers are generally aloof around strangers. Additionally, Texas Heelers do not tend to bark without provocation. So, if a stranger is entering your home, a Texas Heeler is much more likely to bark.

While Texas Heelers do need a fair amount of exercise, they are generally considered a “low-maintenance” animal. For example, beyond regular bathing, Texas Heelers have very few grooming requirements. While some Texas Heelers shed, they are short-haired dogs, meaning that you do not need to take them to the groomers unless you choose to do so.

Though herding cattle with dogs is not as common nowadays, the Texas Heeler has found a new purpose for its speed, energy, and agility. Many Texas Heeler owners are putting their pets in sports competitions to take advantage of the breed’s natural abilities. However, like any dog breed, Texas Heelers can only participate in competitions at a relatively young age, as older dogs may run into issues with hip dysplasia and arthritis.

What Are Some Common Health Problems for the Texas Heeler?

Like any dog, the Texas Heeler needs a well-balanced diet to meet its nutritional needs and ensure a long and healthy life. Since this is a particularly active breed, this type of dog may need to eat a diet that is relatively high in calories compared to some other breeds. Dry foods that are made specifically for high-energy dogs are best. However, dog food must also be chosen for the specific size and age of the dog.

Crossbreeds are less likely than purebreds to develop hereditary health complications, and for the most part, Texas Heelers are very healthy dogs. However, like any breed, they can still run into certain health issues.

One of the most common health problems among Texas Heelers is hip dysplasia or an abnormal formation of the hip socket. This is likely due to excessive running and a generally active lifestyle. With age, this often leads to decreased movement and painful arthritis. In some cases, dogs may even lose the use of their back legs and require surgery or special equipment to regain mobility.

Another common health issue is distichia. This issue is characterized by one or more “extra” eyelashes that grow from the margins of the eyelid. Though generally not serious, if left untreated, distichia can result in pain, eye irritation, and even bacterial infections.

While not as common as hip dysplasia or distichia, Texas Heelers can also suffer from progressive retinal atrophy (PRA). This issue causes progressive vision loss that can eventually lead to blindness. Similarly, Texas Heelers are prone to cataracts.

Finally, another issue that Texas Heelers may face is epilepsy. This is a neurological disorder that causes random seizures. This is generally a lifelong disease.

Thankfully, most serious health problems are relatively uncommon for this breed. Texas Heelers usually live between 13-15 years and do not incur high healthcare costs like some other breeds.

Can a Texas Heeler Be a Service Animal?

Many breeds can work as service animals. But what exactly is a service animal? According to the AVMA and the Americans with Disabilities Act:

“Any dog that is individually trained to do work or perform tasks for the benefit of an individual with a disability, including a physical, sensory, psychiatric, intellectual, or other mental disability. Other species of animals, whether wild or domestic, trained or untrained, do not service animals for the purposes of this definition. The work or tasks performed by a service animal must be directly related to the individual’s disability. Examples of work or tasks include, but are not limited to, assisting individuals who are blind or have low vision with navigation and other tasks, alerting individuals who are deaf or hard of hearing to the presence of people or sounds, providing non-violent protection or rescue work, pulling a wheelchair, assisting an individual during a seizure, alerting individuals to the presence of allergens, retrieving items such as medicine or the telephone, providing physical support and assistance with balance and stability to individuals with mobility disabilities, and helping persons with psychiatric and neurological disabilities by preventing or interrupting impulsive or destructive behaviors. The crime deterrent effects of an animal’s presence and the provision of emotional support, well-being, comfort, or companionship do not constitute work or tasks for the purposes of this definition.”

“An emotional support animal (ESA) may be an animal of any species, the use of which is supported by a qualified physician, psychiatrist or other mental health professional based upon a disability-related need. An ESA does not have to be trained to perform any particular task. ESAs do not qualify as service animals under the Americans with Disabilities Act (ADA), but they may be permitted as reasonable accommodations for persons with disabilities under the Fair Housing Act. The Air Carrier Access Act provides specific allowances for ESAs traveling on airlines, though documentation may need to be provided.”

“Therapy dog” is another category that is often lumped together with service dogs and emotional support animals. Unfortunately, Texas Heelers generally do not make great therapy dogs, as therapy dogs need to have a more calm demeanor. They also cannot try to jump on patients that they are serving, and Texas Heelers are very active and energetic.

For more information on registering a Texas Heeler as a service animal or emotional support animal, consult usserviceanimals.org today!