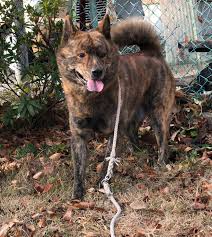 Unless you’ve met one before, you may not be very familiar with the Kai Ken, an uncommon dog in the United States. If you overlook this breed, though, you’re really missing out as the Kai Ken is known as a natural guardian with quiet and calm independence that makes it perfectly suited to being an emotional support animal.

The Kai Ken is a Japanese dog breed that’s often mistaken for a brindle Akita, another Japanese breed that’s far more well-known. A medium-sized dog, a Kai Ken is remarkable in its intelligence, loyalty, and protective instincts.

Here’s what you should know if you’re thinking about adopting a Kai Ken, including its temperament, appearance, and health.

So, What Is the Kai Ken Breed?

The Kai Ken is a medium-sized dog that comes from Japan where it’s still considered a rare breed. Today’s Kai Ken is a descendant of ancient dogs that lived in Kai, a mountain province of Japan near Mount Fuji that’s geographically isolated. The breed was discovered in Kai in 1929 and it took just two years to form the Kai Ken Aigokai, the first Kai Ken registry.

Due to this isolation, the Kai Ken is believed to be Japan’s purest dog breed.

The history of the Kai Ken goes back to ancient times when dogs and humans first migrated to the Japanese archipelago. Archeological remains of the Jomon people include the skeletons of small dogs but the Yayoi people came next, bringing new people and dogs from Asia with larger frames. It’s from these dogs that the six native dog breeds of Japan are descended, including the Kai Ken. The isolated mountainous regions of Japan have been perfect for isolating these ancient breeds.

The Kai Ken was bred as a hunting dog and it’s definitely a natural. Kai Kens have been known to climb and swim when hunting game. Still, they have a lot more to offer outside of hunting with an extreme amount of loyalty and deep bonding with their families.

The Kai Ken first came to the United States when military service members brought them back in the 1950s. The breeding stock of the Kai Ken in America, however, comes from three female puppies and a single 4-year-old male brought to the U.S. in 1990. A year later, seven more dogs were imported as breeding stock. These 11 dogs made up America’s breeding pool for the unique Kai Ken breed.

The Kai Ken is a striking dog with a beautiful brindle coat in a range of colors. Kai Kens look a bit like a small, less burly Akita and both dogs are from Japan. The Kai Ken is most comparable to the Shiba Inu or Japanese Spitz.

A Kai Ken usually weighs about 30 to 50 pounds and measures up to 22 inches at the shoulder. These pups have pointed ears and a wedge-shaped head with a fox-like or bear-like face. The Kai Ken’s tail is fluffy and may be carried like a sickle or curled over the back. They also have a double medium-length coat.

You can recognize a Kai Ken by its distinctive and beautiful brindle coat in three color variations:

The rarest coat for a Kai Ken is the red brindle coat.

The Kai Ken was bred as a hunting dog and this unique coat style helps the dog blend in with a forest setting. As puppies, most Kai Kens are black with a brindle color and pattern that emerges and changes over a period of five years.

There are actually two variations on the Kai Ken Breed:

In Japan, these two types are not distinguished as being different.

The Personality and Temperament of the Kai Ken Breed

If their beauty isn’t enough, their personality is sure you lure you in. The Kai Ken is one of the most intelligent and well-behaved breeds you can find with the loyalty and protective instincts of a German Shepherd — in a smaller, cuter package.

The Kai Ken is known for its friendly and high-energy personality and it forms very close bonds with its family. As a general rule, Kai Kens typically do very well with kids and other dogs and aren’t known for showing aggressive behavior to other dogs.

Still, it’s important to socialize a Kai Ken as early as possible. Their fun-loving personality takes some time to show through and they tend to be shy or reserved around strangers. The flip side is this makes them excellent watchdogs.

The Kai Ken is a rare and healthy dog breed that can be challenging to find in the United States. You’ll have the best luck by looking for a breeder specializing in Japanese breeds like the Kai Ken.

Make sure you choose a breeder that only breeds health-tested Kai Ken. You can expect to have your work cut out for you finding a Kai Ken breeder in the United States as there are only a handful, or about a dozen or two, that are well-known and active. You may have luck with the Nihon Ken Forum Group which is operated by Japanese dog breed enthusiasts. If you do have luck finding a breeder, be prepared for a wait. Many have long wait lists for puppies and Kai Ken tend to have small litters.

You may have luck finding a Kai Ken in a shelter or up for adoption online but this can be challenging. Many shelters and even dog enthusiasts may not even recognize a dog as a Kai Ken given its rarity and it probably won’t be advertised as such.

Many people who fall in love with Japanese dog breeds like the Kai Ken make the decision to import their pup directly from Japan. If you decide to import a Kai Ken, there are some steps you must take including getting a permit from the Department of Agriculture and a rabies certificate for the dog. Depending on your state, you may face other requirements like blood tests within 120 days and a required quarantine.

Because the Kai Ken is such a rare breed, it isn’t known if they have any specific health risks. The good news is they are generally viewed as a very healthy breed without any known conditions you should watch for thanks to the purity of the breed and the fact that they aren’t overbred.

What Makes the Kai Ken a Great Support or Service Animal?

Any breed can be a loving and supportive ESA but you’re probably looking for certain characteristics when choosing an emotional support animal or a trained service animal.

The Kai Ken can make an amazing emotional support animal with at least many of the traits you’re looking for. This beautiful breed is:

It’s especially important to note that the Kai Ken is intelligent and easy to train. This is crucial when choosing an ESA or service animal as both must be able to behave in public and around other people. If you are on someone else’s property, you can be asked to leave if your ESA or service animal is disruptive or fails to respond to commands, even if you have them registered.

With a Kai Ken, you shouldn’t have trouble teaching your pup important commands and social skills that will make them a supportive companion at home, in public, and when you travel.

The Kai Ken is a small- to medium-sized dog, usually around 30 to 40 pounds, which makes them great for traveling and adventuring together, too. Their small size, loyalty, and guarding instincts even make them well-suited to apartment living, something that may normally be challenging for other dogs of similar sizes.

Caring for a Kai Ken doesn’t require much more than a typical dog. Their coat is easy to manage with weekly brushing. With the Kai Ken’s double coat, you can expect some shedding but this can be managed without much trouble with regular brushing.

If you’ve decided to adopt a Kai Ben as your new service animal or emotional support animal, you have a lot to look forward to! Just make sure you register your Kai Ken as an ESA or service animal. At US Service Animals, we offer a fast and easy ESA and service animal registration process that includes a certificate, animal ID, and inclusion in our national database.