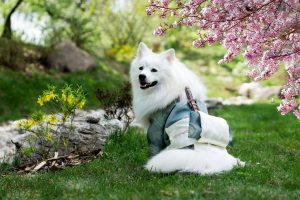 The German Spitz is known for its bright, fun personality and beautiful coat. It belongs to the spitz category of dogs that are bred for three reasons: to hunt, herd, and pull sleighs, as they are from the Northern European region, though different breeds of spitzes have originated from all over. For instance, the Akita, another type of spitz carries the same qualities, but it was bred in the northern region of Japan. Other famous varieties of spitzes include the Norwegian lundehund and the Finnish spitz. They are characterized by their curled tails and playful, loyal personalities. They all share similar characteristics, but none are as classic as the German spitz.

While they might seem similar to their cousin, the Pomeranian, because of their long, luscious coats, playful personality, and curled tails, their faces can look similar to that of a fox, and their coats do not usually puff out so much.

Known for being extremely good family dogs, due to their playful and sweet personality, they are a perfect fit for those with small children. However, they make a great companion for nearly anyone!

History of the German Spitz

The German spitz originated from the Nordic and Germany, and while the German spitz isn’t known for being a part of a class such as hunting or herding today, hundreds of years ago they were bred just for that. Back then, it’s speculated they were a little bigger (around 20-30 pounds), however, today, they have two sizes: the keeshond and mittel. While the keeshonds stayed roughly the same size as their ancestors, perhaps even a little bigger, the mittel substantially decreased in size and are known to be “purse dogs,” like the Pomeranian. It wasn’t until the 1800s that people started using them as companion dogs, rather than for a purpose, when they were introduced to royals.
Since then, the German spitz has been quite popular in Germany and England, though it still remains fairly unknown in America. In fact, even the AKC (American Kennel Club) only decided to recognize it as an official breed in 2010, though they did with similar breeds much earlier. The UKC (United Kennel Club), on the other hand, does recognize it, and they have for over 10 years.

Today, there aren’t a lot of German spitzes in America, which can make it difficult to find a breeder. However, even though they are a rarer dog breed, their cost is still fairly reasonable. You can expect to find a purebred German spitz puppy for anywhere from $400-700+.

The Basics: What You Should Know About a German Spitz

These sweet little guys come in two packages: the keeshond, and the mittel. The keeshond is the larger variety of the two, standing at around 17 to 18 inches, and weighing in at 30 to 40 pounds. While they’re larger, though, they remain in the medium-sized dog category. So, they’re perfect for anyone who wants a larger dog to do more with, but they still aren’t too big to become an issue when traveling and such. For those that would prefer a smaller dog, we recommend the mittel; all the keeshond traits in a smaller dog. They offer the same great looks and personality we love in a keeshond, without the larger size, making them perfect for travel. They stand at 9 to 12 inches, and usually weigh 8 to 24 pounds. Both the keeshond and mittel’s life expectancy is estimated at about 13 to 15 years.

The coat of a German spitz is medium-long in length, straight, and requires a lot of daily brushing to keep their manes looking beautiful every day. They are a shedding dog, so you can expect to find a lot of their fur throughout the house. Nearly every color variety of the German spitz is solid, except for the black and tan, where tan is broken up by spots or speckles of black, or vice versa. Other colors you can expect to find a German spitz appearing in are white, cream, black, orange, red, or brown. The German spitz’s eye and nose colors don’t have a lot of variety; to match each coat, each dog has a standard set of black eyes and nose. To top it all off, they have a curled tail. Though they don’t show a lot of variety in their coats and eye color, their long, silky coats and spunk catch everyone’s attention.

Purebred dogs are more likely to carry genetic diseases, and German spitzes are no different, unfortunately. One of the biggest diseases associated with the breed is idiopathic epilepsy. While finding a German spitz with epilepsy is still rare, it is important to watch out for seizure and monitor them. If your dog is experiencing an excess of seizures, or his seizures are long-lasting, a vet may be able to help. Other diseases a German spitz are more likely to have are retinal dysplasia and progressive retinal atrophy (PRA). Both these can cause blindness and are like cataracts. With PRA, however, a film develops across the eye and kills the rod cells over time

(http://animaleyecare.net/diseases/pra/). While it isn’t painful for the dog, they will ultimately lose their eyesight. There is no cure for PRA, but antioxidants can help retain eyesight for some time.

The Temperament and Personality of a German Spitz

Like the rest of the spitz family, German spitz don’t lack in personality. These sweet dogs are known for their good and playful personalities, which makes them great companions for nearly anyone. Since they’re so good-natured, they are excellent with a family with children but can also thrive with just one person, as well. Since they are moderately energetic, however, we would not recommend an elderly person own one of these dogs, unless they have a way to provide them with plenty of exercise. While they aren’t the type of dog that will be bouncing off the walls with loads of energy, they still need daily exercise. On average, a German spitz will need to be walked at least once a day, or played with, in order to burn off some of their energy.

They are loyal dogs, as well, so that makes them a great companion. They are known for being absolutely devoted to their owners and will be your dedicated sidekick through everything. While they’re also very obedient, they can be known to bark quite a bit. This may be an issue for some, if you live in close proximity to your neighbors, such as in an apartment building. But for others who don’t mind it as much, they are a great dog. Since they’re obedient and smart, it is possible to train them, but it will take some effort. Like any dog, they need to be reminded of commands and such all day, every day, in order to break a habit like barking.

In general, they can be described as lovable, sweet, funny, and overall good dogs. They are confident in everything they do, and they will follow you around every day, adoringly. It’s nearly impossible to find a dog as loving and devoted as a German spitz.

Would a German Spitz Make a Good ESA?

When it comes to being a companion dog, a German spitz takes the cake, and so, yes, they would make a delightful emotional support animal (ESA). The mittel version of the German spitz is less likely to perform large tasks, but its small size makes it perfect for travel and emotional support. Since the keeshond can reach upwards of 40 pounds, they are a better candidate to act as a service animal, can perform more tasks for their owners, and are still a manageable size for travel. Both are highly receptive to training, so you can be sure that a German spitz would be able to learn any commands or warning signs necessary for your disability.

Whether you’re looking for one or already have your furry companion, any dog can be trained as an ESA. All it takes is for them to help you with your principle functions throughout the day, whether that be functioning at all, simple tasks, or with overall emotional support. If you need an ESA, any animal that helps you feel and function your best will work.

Why Should I Register My ESA?

When you register an ESA, you gain access to legal support and protection. This can be for anything from housing, to work, to travel. Because of animal restrictions, a landlord, employer, or travel authority (whether on a bus or plane) can cause a stir and potentially have you removed due to their rules and regulations, but with the proper paperwork and identification as an ESA, you and your ESA are protected. You are not obligated to disclose your disability to anyone, which protects your privacy.

We here at U.S. Service Animal and Support Animal Registry want you to be fully aware of your rights and totally protected. That’s why we’re here to help. We offer resources for ESA owners and animals, and we do our best to educate everyone, because the more you know, the more you’re protected.