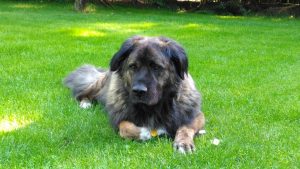 Animals have long been an important part of daily human life. This is even more true for the only animal who has earned the title of Man’s Best Friend: the dog. Dogs have been used as hunting aids, protection from animals or intruders, and as lifelong companions and bedmates for centuries. Each breed of dog has its own distinct characteristics in appearance, temperament, and utility. The Estrela Mountain Dog is a dog worth particular consideration due to the combination of their imposing presence and surprisingly gentle nature.

A true gentle giant, the Estrela Mountain Dog (also called the Portuguese Shepherd or Cao da Serra de Estrela in its native country Portugal) has been used for generations as a companion and a protector of humans and their property. They are intelligent, gentle with friends, and alert in all situations. They are even used by the Portuguese police as working animals. On top of all that, they are very attractive and sturdy animals.

The Estrela Mountain Dog is a large dog that weighs in at roughly 90 to 120 pounds when fully grown. Especially large Estrela males can tip the scales at over 130 pounds and stand up to 30 inches in height. They have a large, sturdy bone structure that is meaty and well-muscled. Their coats can be either short or long but both lengths have a texture that is often compared to goat hair. This coat consists of an outer coat and an insulating inner coat that provides them additional protection from the elements.

They look right at home in the mountains with their sturdy frame and thick mane. They have deep black masks on their face with a fawn, wolf gray, or yellow coat that can sometimes be brindled. They also can have white markings or shadings of black in their coat. They have an upright, athletic bearing and their gait is similar to a wolf in that their head remains parallel with their body when they are in motion.

They have a large, round head with a relatively shorter muzzle that gives them their characteristic mastiff-like appearance when combined with their lively, calm, and expressive face. Their skull and muzzle are typically the same length with the skull sometimes being slightly longer. The Estrela Mountain Dog is well-proportioned with a longer frame and a deep chest.

Their large size and imposing presence makes them great guard dogs and their natural athleticism combined with their sturdy frame allows them to fend off all kinds of predators if necessary. The Estrela Mountain Dog is a noble creature with a proud bearing yet gentle nature that makes them a great option for family protectors and playmates.

The Estrela Mountain Dog gets its name from its place of origin: the Serra da Estrela (Estrela Mountains) in what is known today as Portugal. They are said to have either been brought to this region by the Romans when they were colonizing the Iberian Peninsula or by invading Visigoths. Regardless of who brought them to the area, they are known to be one of the oldest dog breeds in Portugal with a long history of serving locals of the region.

The Estrela Mountain Dog developed into its characteristic traits and appearance over several hundred years while they were bred and used as shepherd companions for tending stock in the rugged Estrela Mountains of Portugal. They were bred to be large animals with great strength and endurance while still being agile enough to navigate rocky paths. The Estrela Mountain Dog was also bred for its loyal and dependable nature to ensure they would remain steadfast protectors of their masters and their master’s property and livestock.

The Estrela Mountain Dog had its first recorded breed standard published in 1922 with the first official breed standard written later in 1933. This standard was created to establish a differentiation between the Estrela Mountain Dogs and other similar breeds of dog. The standardized regulations were not that strictly adhered to by locals of the region due to the fact that they continued to breed them for their utility and not their appearance. However, thanks to the relative isolation of the Estrela Mountain region, they did not get cross-bred with other dogs very often and did maintain their characteristic appearance.

This isolated region did not see much change even into the early 20th century which leads to this breed to be mostly unknown by the outside world for a long period of history. It wasn’t until the 1950s that interest in this breed began to rise in the world of show dogs. This helped lead to locals maintaining a stricter adherence to aesthetic characteristics such as the now required standard hooked tail of the Estrela Mountain Dog along with their double dewclaws.

This breed is almost only found in Portugal today; however, the United Kingdom and the United States have both imported breeding stock into their nations. Today, officially recognized Estrela Mountain Dogs can be found in a few other countries from reputable breeders who have carefully preserved their heritage.

Estrela Mountain Dogs are renowned for their combination of loyalty, intelligence, and kindness. These gentle giants are loving family members that create a bond for life with their master. Despite their gentle nature, Estrela Mountain Dogs are capable of leaping to action to protect their master and family when necessary. They are adaptable and calm natured but take well to training and can be extremely useful animals for all sorts of tasks.

More specifically, Estrela Mountain Dogs have a great personality and bearing that makes them great guard dogs and even better police service animals. They are strong-willed with an independent mind that can require persistent training and confident leadership to keep them in hand. A strong will is necessary to master this regal animal but once they are trained and have established a bond, they will lay down their lives for their master’s family.

They are still used today as guard dogs and the Portuguese Marines also employ them as patrol dogs. These working dogs still take care of livestock flocks in the Portugal mountains with their steadfast nature and imposing presence.

Surprisingly, despite their large size, the Estrela Mountain Dog has a fairly long life expectancy in comparison with other large breeds. They are expected to live healthy lives lasting anywhere from 12 to 16 years thanks to their hardy nature and healthy genes. Thanks to the fact that they were bred for their physical capabilities, these dogs are quite healthy and don’t have any particularly noteworthy health issues in general.

Exercise is an incredibly important aspect of life for all animals and this is no less true for dogs. Estrela Mountain Dogs traditionally lived fairly active lives as they were used to guard flocks of livestock in the mountains of Portugal. Despite this lifestyle, they are not exceptionally energetic dogs when it comes to expectations of daily exercise. They are relatively relaxed and calm animals that should only require short, daily walks to keep them satisfied.

As they are larger animals, they can have pretty big appetites to match. However, they are not generally overly active animals which means their portions should be carefully measured to ensure they are not overfed. Monitoring the weight of your Estrela Mountain Dog carefully will let you know if they are eating too much or too little. These animals should be fed food appropriate to their size, age, and activity level to ensure they get the proper nutrition to keep them happy and healthy.

These dogs are loving animals that exhibit a deep love for their master and his family. Walking them for 30 to 60 minutes a day will ensure they remain happy and healthy throughout their lives. The Estrela Mountain Dog is happy to live a relatively mundane life that is dominated by loyal companionship toward their master. They aren’t full-on couch potatoes, so they should get regular exercise even though their energy levels are on the middle to the lower end of activity levels for dogs.

The Estrela Mountain Dog is a natural breed of dog with a thick, double-layered coat of fur that doesn’t require any professional grooming thanks to their upbringing as utility animals. They have a dense coat which will shed a fair amount seasonally. Regularly brushing your Estrela Mountain Dog will help reduce the number of stray tufts of hair floating around the house. It’s best to brush your Estrela Mountain Dog once a week during its time of increased shedding. Brushing once every other week should serve just fine otherwise.

Estrela Mountain Dogs can have long or short coats with most of them in Portugal having short coats. If you have one with a longer coat, it can get tangled easily which might require a more careful brushing or combing than the shorter haired animals. The hair around the ears is also prone to matting and should have special attention paid to it. Furthermore, Estrela Mountain Dogs have double dewclaws which will need to be clipped regularly due to the fact that they do not contact the ground and therefore won’t wear themselves down naturally. Clipping of the dewclaws is necessary to prevent them from getting too long and being more likely to get caught in brush or grass and painfully ripped off.

Aside from brushing the coat and clipping its claws, Estrela Mountain Dogs should also have their teeth and ears checked regularly like all other dogs to keep an eye out for excessive buildup which can lead to infections occurring. Gentle cleaning of the ears with a q-tip will help prevent buildup and dogs should also be given treats that help them clean their teeth. Occasional teeth cleaning may be necessary if buildup does occur in the gums and teeth.

Reward-based training helps massively in cultivating the appropriate responses that are desired from dogs. Rewards don’t always have to be treated as praise itself can go a long way; however, when using treats, make sure they are healthy and not overly calorific so as to prevent the dog’s diet from being disturbed. Many dogs respond well to small pieces of fresh vegetables or fruit. You could even just use single pieces of dry dog food because most animals respond more to the praise and the act of being rewarded more than the reward itself.

Estrela Mountain Dogs are loyal and stalwart companions that are highly intelligent and famous for their gentle nature. This combination of traits unique to this breed has made them Portugal’s favorite breed (especially among shepherds) for many generations. They are used as guard dogs by many families across the country and are even put to work by the Portuguese Marines and Portuguese police forces. Their intelligence and kindness make them highly valued as an emotional support animal and their large size and imposing presence combined with a deep bond with their master allows them to provide a calming and reassuring presence for those in need.