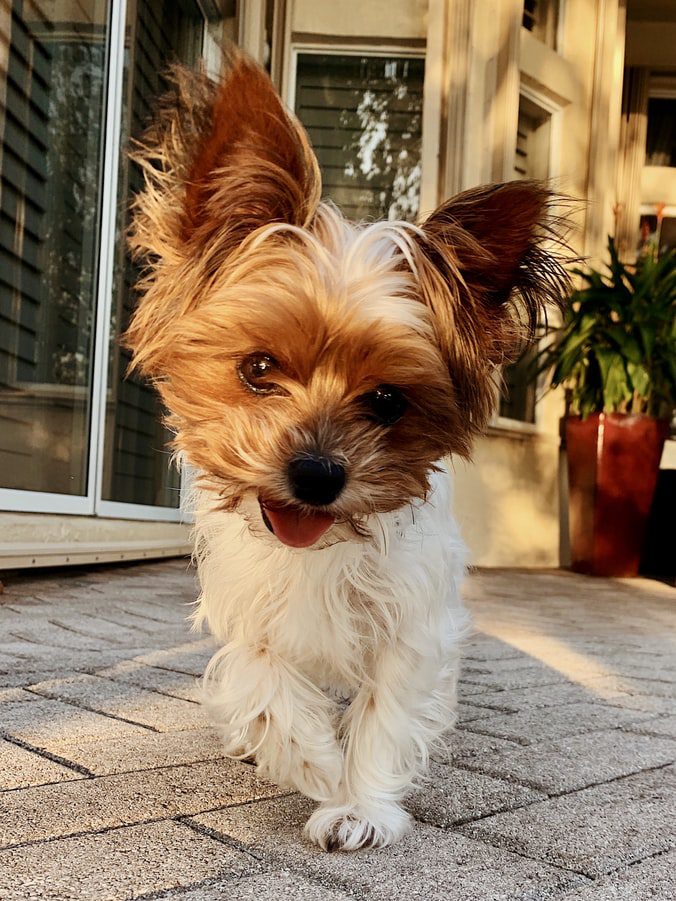 The Biewer Terrier is a relatively new and rare German breed of terrier. This breed did not become recognized until the 20th century, so its history is relatively short. Additionally, there aren’t that many Biewer Terriers out there today, so intentional breeding efforts are necessary to keep the breed alive. In any case, this peculiar little breed is highly sought after among enthusiasts, and can now be found in numerous countries throughout the world.

But what exactly is this relatively unknown dog? And what makes them perfect pets for families, particularly those with young children or the elderly? Let’s take a look at where the Biewer Terrier breed came from, their traits, and their official recognition as a breed to get a better understanding of what makes them one of the biggest hidden gems of the dog world.

What is a Biewer Terrier?

To get a better idea of what to expect with a Biewer Terrier, look no further than the American Kennel Club’s official description of the breed:

“The Biewer Terrier, pronounced Beaver like the little dam building animals, is a dedicated, loyal family member and a friend to all they meet. It is not uncommon to be met with a smile from this happy-go-lucky dog.  Although not a constant barker, they will alert you to company. With a larger than life personality, their lighthearted, childlike whimsical attitude will keep you entertained for hours. In spite of their small stature they are hearty and athletic, able to keep up with the best of them on long walks, hikes or competing in the agility ring.”

Though it originated in Germany, the Biewer Terrier has since spread to other parts of Europe and beyond. Today, the breed is a popular house pet due to its charming personality, small size, and attitude that reminds its owners of a big dog in a small body.

History of the Biewer Terrier Breed

The history of the Biewer Terrier is not very long, but it is nonetheless fascinating. The Biewer Terrier was the result of a recessive piebald gene in two Yorkshire Terriers. This is why the breed shares many of its physical and behavioral traits with Yorkies, to the point where the two breeds can easily be confused by those who don’t know a lot about the Biewer. But where exactly did the Biewer Terrier come from?

Where Did the Biewer Terrier Breed Originate?

The Biewer Terrier was first bred into existence in 1984. Originally, the breed was named “Biewer a’ la Pom Pon,” though its title was later shortened. Werner and Gertrude Biewer had been raising Yorkshire Terriers for nearly two decades before breeding the first Biewer Terrier in Hunsruck, Germany.

Though their ultimate origins were unintentional, through later selective breeding the Biewers continued to breed their Biewer Terriers until 1988, when they introduced the breed to the show ring in Wiesbaden, Germany. The owners attempted to introduce their two dogs as “black and white Yorkshire Terriers,” but they were not accepted as a new breed at the time, nor were they accepted as show-worthy Yorkshire Terriers due to being the “wrong” color for breeding.

Eventually, the family was able to find a German Kennel Club willing to accept the dogs as a new breed. In the late 1980s and early 1990s, other breeders took interest in Biewer Terriers and began breeding them further.

While popularity for the breed waned in Germany in the early 2000s, it was simultaneously introduced in North America, where its popularity quickly grew. Today, the Biewer Terrier is rare and expensive, but highly sought after, especially in the United States.

Is the Biewer Terrier a Recognized Breed?

Despite its tumultuous origins, both the American Kennel Club and German Kennel Club now recognize the Biewer Terrier as an official breed. Since its recognition, the Biewer has been a favorite in many dog shows and competitions. But what exactly are the criteria that must be met to be considered a standardized breed?

The Biewer Terrier is a recognized breed in the “Toy Group.” The American Kennel Club says that dogs in this group are not only small, as one might expect, but tend to be affectionate, social, loving, and full of unique personality. They might be too small to offer any effective guarding services, but they’re still as loyal and protective as many large dogs, and will attempt to scare off intruders with their barks, even if the threat of their bites might not be as effective.

What Are the Physical Characteristics of the Breed?

The Biewer Terrier is a small dog—males and females don’t differ much in height, and both tend to be about a foot tall at maturity. Their diminuitive height is matched by their weight—they might not realize it, but most healthy Biewer terriers max out at about ten pounds, with some not even reaching half that weight.

In terms of color, there is quite a lot of variation among Biewer Terriers. While Yorkies are generally a fairly predictable black and brown, Biewer Terriers are quite divergent, and can be white or black, with hints of brown and blue. This breed generally has medium-length, silky fur that does not shed. As an added bonus for dog-lovers who suffer through allergies, the Biewer Terrier is hypoallergenic.

Like most other terriers, the Biewer Terrier has a very small build, with short legs and large heads (in comparison with the rest of their body). They have medium-length tails. Though their hair grows long naturally, some owners choose to keep their hair short, especially around the face. Biewer Terriers typically have cropped ears, though the popularity of this practice for aesthetic purposes is declining.

What Are the Behavioral Characteristics of the Breed?

While Biewer Terriers may look a little different from Yorkshire Terriers, their shared lineage means that they tend to behave mostly the same. Both breeds are very high-energy, intelligent, loyal to their families, friendly, and playful. Biewer Terriers love to be the center of attention whenever possible. When they’re not lounging around the house, these dogs love to play and burn off excess energy with their owners. The Biewer Terrier generally responds well to training, and is eager to learn new commands. They are also friendly and very safe for families and children, but they are also very protective of their family, which means that they may or may not respond well to strangers. Some dog owners will ignore these dangerous tendencies from small dogs like Biewers but this isn’t smart—a nippy Biewer Terrier can cause pain, especially to children or other pets.

Like many other small breeds, Biewer Terriers bark loudly if they sense danger or intruders. While some friendlier breeds will want to play with strangers, Biewer Terriers are more likely to bark (to alert the family) or become aggressive when encountering a stranger. This can actually make them a somewhat effective guard dog—as long as the potential intruder doesn’t actually see the little fluff ball that’s making so much noise.

Biewer Terriers are not an easy dog to care for. In addition to the surprisingly high amount of exercise that they require in order to stay happy, they also need regular grooming of the fur and nails, as their fur can grow long and get easily matted.

Additionally, they are very small and can easily get underfoot. The clumsy and families with small children (or larger dogs) need to be extra careful not to accidentally kick or step on Biewer Terriers.

Since the Biewer Terrier was essentially bred to be a show dog and family pet, it is frequently used in shows for its beauty and versatility. They’re somewhat popular among canine sport enthusiasts.

What Are Some Common Health Problems for the Biewer Terrier Breed?

Like any dog, the Biewer Terrier needs a well-balanced diet to meet its nutritional needs and ensure a long and healthy life. A mixture of dry and wet foods that are made specifically for small, high-energy dogs are best. The specific recommendations will vary depending on your dogs age and size, but be careful to not overfeed—owners often neglect to notice weight gain in toy dogs, partially because they don’t realize how impactful just a few extra pounds can be. When a dog only weighs five pounds, a two pound gain is huge—and can have huge impact on a Biewer Terrier’s body.

That being said, a Biewer Terrier that eats well and gets enough exercise is generally a healthy dog. Due to their close relation to the Yorkshire Terrier, they share many of the same genetic strengths.

Additionally, Biewer Terriers are susceptible to several genetic disorders, including patellar luxation and bladder stones. Patellar luxation is essentially a dislocation of the kneecap, which may require surgery or other treatments. Bladder stones are mineral build-ups in the bladder that can cause difficult, painful, and bloody urination.

Thankfully, most serious health problems are uncommon for this breed. Smaller dogs in general tend to live longer, healthier lives that medium and large dogs. The average Biewer Terrier usually lives between 12 – 15 years, and should remain mobile, active, and friendly throughout its life.

Can a Biewer Terrier Be a Service Animal?

There are no official breed restrictions for service animals, but some types of dogs are more well-suited to it than others. The AVMA and the Americans with Disabilities Act, who legally enforce the usage of the term, say that a service animal is “any dog that is individually trained to do work or perform tasks for the benefit of an individual with a disability, including a physical, sensory, psychiatric, intellectual, or other mental disability.” Though intelligent and trainable, some of these tasks might be difficult for Biewer Terrier. Anything that requires strength, for example, would be nearly impossible for the breed.

Though their size makes them struggle with many support tasks, their amiable, friendly nature makes them great for providing emotional support—and the small size that makes them poor physical support animals even works to their advantage here, making them great support companions for children and the elderly.

The phrase “therapy dog” is often used to mean something identical to an emotional support animal, but this isn’t accurate. There’s actually a distinction between the two—ESA is a distinct legal category with restrictions and guidelines that must be followed, while a therapy dog is a general term for any dog that is used to help people with their emotional well-being.

Biewer Terriers are equally excellent at both, though—if not the best service animal for any needs that their small stature would preclude them from being effective at. The tiny Biewer is gentle, loveable, and adorable—so even though it might not be able to provide physical support or protect your family (unless the intruder is scared away by its bark!), they make a great companion that can show you and your loved ones that emotional support is just as valid as any other kind.

For more information on registering a Biewer Terrier as a service animal or emotional support animal, consult usserviceanimals.org today!