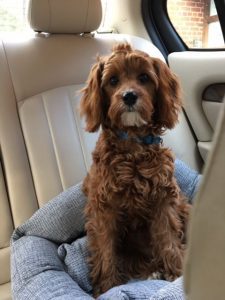 Humans have long taken an active role in the raising and breeding of all kinds of animals for various pursuits and uses. Throughout history, humanity has made it a point to conquer nature and attempt to bend it to their will. This is readily evident when looking at the development of dog breeds over time. We have spent generations breeding dogs for specific purposes such as hunting companions, guard dogs, and fluffy couch mates.

In recent decades, people have taken to crossing two separate purebred dogs with the goal of combining the best of both worlds. One of the most popular dogs used as one-half of these new hybrids is the Poodle with the second parent varying depending on the specific characteristics desired by the breeder. Poodles have been used in recent years as a base breed in hybrids due primarily to their hypoallergenic fur that doesn’t shed. One of the more recent hybrids that have received a lot of adoration from the general public is the combination of a Poodle (most often Miniature Poodles are used which results in smaller statured offspring) with a Cavalier King Charles Spaniel.

The resulting hybrid breed has been dubbed the Cavapoo by most but is sometimes referred to as a Cavoodle or a Cavadoodle. Regardless of what name you ascribe to this creature, it’s fun-loving spirit and cute appearance remains the same.

Cavapoos, like most other hybrid animals, can have appearances that vary to a degree depending on the relative influence of each parent’s genes on their children. As mentioned above, Cavapoos are the result of the crossing between two purebred dogs: the Poodle and the Cavalier King Charles Spaniel. Typically, a Miniature Poodle or a Toy Poodle is used which results in Cavapoos being small dogs that weigh around 8 to 17 pounds when fully grown.

Most often, Cavapoos have compact faces that are topped with floppy ears and dominated by large eyebrows. Their eyes are almost always brown, large, and set fairly wide apart from each other while their noses tend to be of black coloration. They have a gentle and innocent appearance to their facial features that gives them a rather cute visage. Their coats are medium to long in length and typically come in white, brown, black, or tan coloration. Their coats are quite dense, and the hair is generally wavy and soft in texture.

These animals are renowned for their cute, almost teddy-bear like appearance as a result of their soft, wavy hair combined with floppy ears. Their physical bearing can vary due to their hybrid nature but most Cavapoos stand upright with well-proportioned limbs and small, round paws. They aren’t particularly well-muscled but are more than capable of keeping up with children and other dogs at play.

Like most of the newer Poodle + X hybrids, the Cavapoos originated in Australia. Cavapoos started to become popular crossbreeds in the early ‘90s with various high-profile Australians having Cavapoos in their families. It didn’t take long for their cute and cuddly nature to become in high demand and they were soon being bred in the United Kingdom and the United States among other developed nations. Today, they enjoy a fair amount of recognition and are constantly in demand.

Digging deeper into the history of the Cavapoo requires looking at their parentage separately: the Poodle and the Cavalier King Charles Spaniel.

There is still some debate as to whether Poodles originated in France or Germany but either way, they have long been a prized breed for both their intelligence as well as their natural poise and agility. They are considered to be the second most intelligent dog breed after Border Collies. Poodles have been popular dogs since at least the 15th century in various parts of Europe. They are considered to be water dogs which were and still are used for hunting duck. Poodles have also been put to the test in various forms of dog competitions such as agility and obedience competitive events. Poodles are bred in three different sizes: standard, miniature, and toy.

Cavapoos owe their heritage, personality, and appearance to both the Poodle and the Cavalier King Charles Spaniel equally. The result of this combination has been considered a massive success due to the popularity of Cavapoos thanks to their adorable appearance, hypoallergenic fur, and lovely personality.

Cavapoos are renowned for both their cuddly appearance and their wonderful, people-loving nature. They are fast friends with all humans and simply adore spending time with their masters. This can be a little bit of a negative as they don’t like to be left alone and can get into mischief if left by themselves for long stretches of time.

Cavapoos have a seemingly endless font of energy inside the home and they can be very playful and goofy at times. This is especially true when you come back home or any new person arrives as they are prone to getting very excited when presented with the opportunity of greeting anyone. This hyperactivity tends to only come in short bursts with them being otherwise quite content with sitting on a lap or taking a nap beside their owners on a couch.

The Cavapoo is quite intelligent and will learn quickly if time is taken to train it properly. Cavapoos get along well with humans of all sizes and ages. They also do well with other dogs. Cavapoos are eager to please their masters and will attempt to do what is asked of them most of the time. However, if they are not given firm direction and leadership, they have the potential to become fairly nuisom with a tendency to yap for attention or destroy things in the home when bored. Establishing yourself as the leader will ensure your Cavapoo keeps on its best behavior at all times.

Cavapoos are typically healthy and energetic animals with a standard life expectancy of 10 to 15 years. Due to their hybrid nature, they are slightly less prone to genetic defects from which purebreds are known to suffer. Having said that, they are not far detached from purebred genetics as they are almost always a first-generation hybrid which means there is a possibility for them to inherit their parents’ unhealthy defects.

Common issues among purebred Poodles and Cavalier King Charles Spaniels that may be passed down to their Cavapoo babies are luxating patella, cataracts, heart failure, and hip dysplasia. These issues don’t tend to crop up that often with Cavapoos but are something to look out for especially if you can get your hands on the health records of the Cavapoos parents prior to purchasing one. Additionally, as with all dogs that have long, floppy ears, ear infections are a rather common occurrence if proper attention and care isn’t provided to them to prevent excessive buildup of earwax that can result in infection.

Cavapoos are small dogs but they can be quite energetic and playful in the home which results in them burning a fair number of calories for their relative size. Dry kibble that is formulated specifically for your Cavapoos age, size, and activity level are recommended. Carefully measuring and monitoring food consumption along with changes in weight will let you know if you should be feeding your Cavapoo more or less food on average.

When it comes to exercising your Cavapoo, the requirements are fairly lax thanks to their naturally energetic nature and the fact that they tend to give themselves a workout throughout the day inside the home. These little pups love to dash around the house for short bursts of activity throughout the day and will generally satisfy their own needs for exercise doing so.

However, it’s always a good idea for both your own health as well as your dog’s to go out for regular walks on a daily basis. Daily walks are sure to be something your Cavapoo will look forward to and greatly enjoy and they will help ensure the pup gets proper exercise. Cavapoos tend to be fairly relaxed and calm animals throughout most of the day with the exception of the aforementioned bouts of play. They don’t typically get overly anxious like other more energetic and needy animals tend to do.

Cavapoos are like most Poodles and Poodle hybrids in that they do require a fair amount of grooming due to the nature of their fur. They generally do not shed, and their coat can grow quite long with a wavy and soft texture. This means tangling is a common occurrence for dogs of this breed. It’s recommended that Cavapoos are taken in for regular professional grooming to keep hair out of their mouth, eyes, and noses. They should also be brushed basically every day to keep their coats neat and clean of all debris or tangles.

As was mentioned above, they also will need to have their ear canals checked and cleaned fairly frequently to prevent infection due to their long, floppy ears. Using a q-tip to gently remove buildup every week or so should help prevent infections from occurring. It’s also important to keep their nails trimmed. Regular walks will help wear down their nails naturally, but if they don’t get outside on the pavement very often their nails can grow uncomfortably long for both your lap as well as your pup.

Cavapoos, like all dogs, should also have their teeth checked for excessive buildup frequently. Occasional brushing of the teeth may be necessary to prevent infection and gum disease. You can also use treats and toys designed to help remove buildup to help with keeping your Cavapoos teeth clean. Cavapoos are generally calm and happy animals that respond very well to praise during regular checkups and grooming.

Speaking of praise, Cavapoos are known to be very trainable thanks to their loving nature and interest in pleasing their masters. Rewards-based training, which can involve treats and praise or simply praise alone, is extremely effective for training Cavapoos. Treats should be healthy and low-calorie pieces of food to prevent overfeeding.

Cavapoos do not respond well to an overbearing or loud nature due to their gentle and somewhat docile tendencies. This means yelling, hitting, or any kind of negative reinforcement is unlikely to yield good results when training a Cavapoo. They respond best to praise and lots of it due to their love of pleasing humans and desire to be pet.

Training is most effective when it is started immediately at a young age and continued throughout their lives. Consistency is of the utmost importance to ensure your Cavapoo understands your expectations and knows how their actions will be responded to by you. Establishing yourself as the leader will help them understand their role in the home and ensure they don’t attempt to take over and do as they please when you’re not around.

Cavapoo – Your Next Best Friend

Cavapoos are highly intelligent and gentle creatures that simply adore being in the company of humans. They are happy to curl up beside you on the couch and will merrily greet anyone who comes through the door. While they are generally calm animals, Cavapoos are prone to short bursts of activity where they bounce around the house and play. They can be quite attention-hungry and may be prone to yapping when they feel bored if this habit isn’t trained out of them at an early age.

Cavapoos adapt well to different environments and love humans strange and familiar alike. This can make them very suitable as an emotional support dog thanks to their easy-going and social nature. If trained properly and treated well, the Cavapoo makes a wonderful addition to any home.