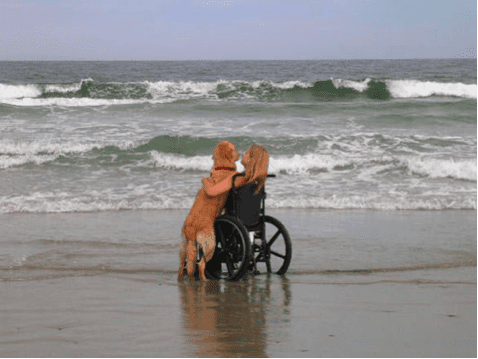 Depending on which state you live in, the laws surrounding service animals differ. It would be too easy if the laws were nationwide, but that is not the case. For the most part, the laws are very similar with just a few minor changes. It is important to check into the laws in your specific state so that you can obtain correct and up-to-date information.

The Florida state laws and the ADA laws differ in a couple ways, but they are clear in the polices that state that service animals must be allowed in most public areas. Florida’s service animal law applies to animals that are trained to do work or perform tasks for someone with a physical, mental, psychiatric, sensory, or intellectual disability. The work the animal does must be directly related to the person’s disability.

Your service animal should be permitted in all of the following locations:

Service animals are exceptions to most pet rules that public places may have. You should never be asked to pay a deposit for your pet or a fee for having your pet accompany you. If your animal causes damage to public property, you will be expected to pay this fee.

You are expected to have access to full and equal housing in Florida. You should never be discriminated against for having your service animal.

Florida allows service animals in training to be in public areas if they are accompanied by their trainer.

There aren’t any significant differences between service animal laws in Florida from other states. They do take their service animal laws very seriously because they see many of them between locals and tourists. Never falsely identify your animal as a service dog or you will be penalized, this is especially important in Florida since it is considered a crime. The high number of service animals that they see has improved their acceptance of the animals and helped individuals learn how to interact and accommodate them. Florida can definitely be considered a safe zone for you and your animal, you can even visit the greatest place on earth together – Disney World.

Service Dog For OCD
Zyrtec for Dogs | Is It Safe For Them?
Service Dog for POTS - How They Help & How To Qualify
The Best Service Dog Training in Wisconsin
Register your service animal today!