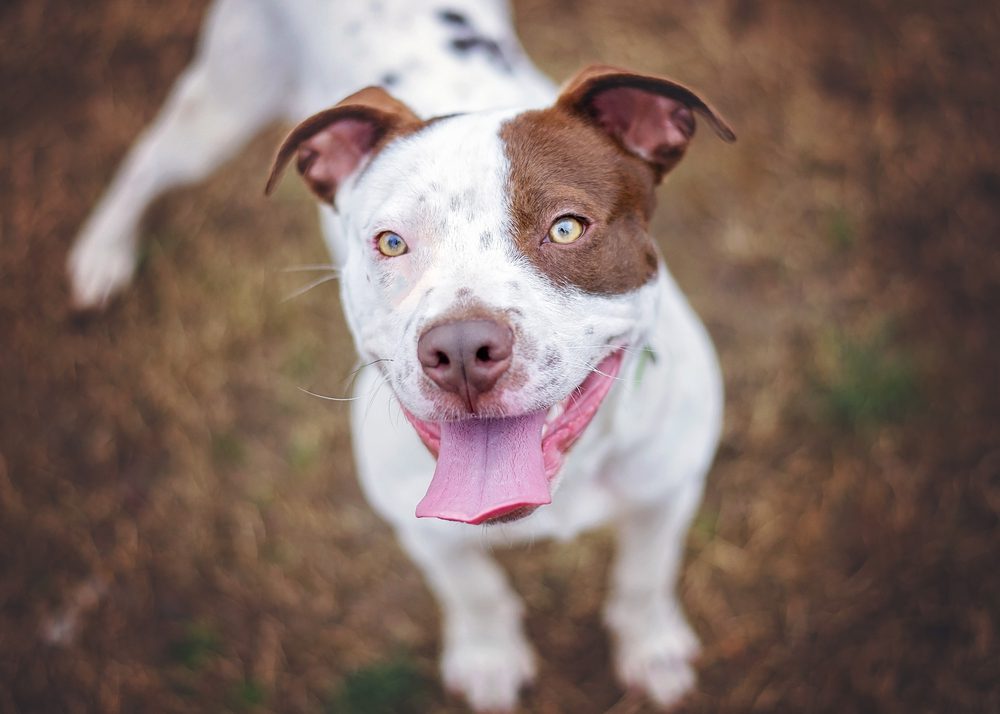 With so many dog breeds out there, it’s hard to determine which dogs make the best service animals. So, can a pit bull be a service animal? Well, the short answer is yes.

The name “pit bull” is a bit misleading. This is because pit bull is a blanket term for four different dog breeds or hybrid breeds. In this article, we’re going to take you through each type and discuss their viability as service dogs.

What Is a Service Dog?

If you’re curious about registering your dog as a service dog, it’s important to know what a service dog is. While the idea seems simple, there are many caveats that you need to understand before working with a service dog.

According to the American With Disabilities Act (ADA), a service dog is a dog that’s trained to work or perform a task for someone with a disability. Additionally, service dogs need to be individually trained for their owner’s needs; there are no “general” service dogs. Service dogs are also not classified as pets under the ADA.

As a bit of a fun fact, the ADA also allows a few other animals to be service animals. For example, miniature horses have become quite popular, and the registration process is similar.

The biggest piece of legislation to focus on for service animals is the ADA. Still, pit bull-type dogs come with some unique caveats, and some states don’t allow them to be housed as pets or used as service dogs. We’re going to take you through some important pieces of legislation you should be aware of.

First and foremost, when working with pit bulls, you need to be aware of breed-specific legislation (BSL). This isn’t something that’s done on the federal level, but some states have laws that don’t allow you to house certain dog breeds. Unfortunately, pit bull-type dogs are one of the groups that are heavily impacted by this legislation.

States that enforce BSL attempt to limit risk to the public by banning as many dangerous dogs as possible. While the states see this as a win, the good news is that most states prefer to track dogs on an individual basis instead. Still, it’s good to know which states will allow you to work with a service pit bull.

Here are ten states that will give you the most trouble:

The reason we’re listing these states is that they have the most municipalities with legislation in-place against pit bull-type dogs.

The American With Disabilities Act

The ADA is the defining piece of legislation that allows people with disabilities to work with service animals. This is a federal law that addresses the need for service dogs and outlines some important guidelines. The ADA outlines a few things, like how a dog needs to be trained, the breeds it can be, and other additional requirements.

Furthermore, the ADA is on your side when it comes to breed-specific legislation. Regardless of a state’s local law, service dogs can be any type of dog breed.

There are a few more general laws and legislations you might want to familiarize yourself with, so you can find those here. Some laws deal with housing, airline travel, and more.

Luckily, all you need to know is that service animals are permitted at your home, in public, and on flights.

Pit bulls are unique dogs because there is no “one” breed of pit bull. Pit bulls are broken down into four different breeds, each one with its own traits and appearance. Knowing which breed of pit bull you’re working with is an important part of the process, especially if you’re looking to train them on your own.

The American Staffordshire Terrier, also known as the “Am Staff,” has roots dating back to the 1800s. These dogs were bred as farm companions, not fighting dogs, so their demeanor is mellow compared to other pit bull-type dogs.

American Staffordshire Terriers are also loyal companions and great to have around the house. Once at home, it’s easy for them to adjust and become the center of attention. With that said, the only drawback is that this breed is not friendly with other dogs, which can cause issues at the park or in public. This doesn’t apply to every dog, but it’s more common with American Staffordshire Terriers than other breeds.

When it comes to looks, this breed is easy to distinguish. While they share similar traits with other pit bulls, American Staffordshire Terriers vary in appearance. They’re a medium-sized dog that ranges from 45 to 85 pounds with a height of about 20 inches. They can also have a handful of different coat colors, but the fur is always on the shorter side.

When it comes to training and temperament as a service dog, American Staffordshire Terriers make great service dogs. While they’re not the best breed, you shouldn’t have any issues getting them trained –especially if they’re well-bred.

The American Pit Bull Terrier has roots dating back to the 19th century. These dogs were bred by mixing a handful of pit bull-type dogs in America. Unfortunately, these dogs were among the most popular for dogfighting. This led to many generations being used as fighters and some aggressive breeds.

Still, the American Bully Terrier is known for being a loyal companion that loves its family. These dogs are easy to train and have no problem helping you with tasks or keeping your home safe. While they’re good dogs most of the time, we don’t recommend bringing them around other dogs, unless they’re well-trained.

Appearance-wise, it’s not hard to spot an American Pit Bull Terrier. They’re on the shorter side, about 17-20 inches in height, and lighter than most pit bull-type dogs. They weigh between 35 and 55 pounds. These dogs have short fur with a wide range of colors.

So, how do they perform as service dogs? They’re decent service dogs but one of the worst among pit bull-type dogs. This is solely for the reason that they don’t always get along with other animals. Unfortunately, this can ruin trips to the park and cause them to misbehave in public.

The Staffordshire Bull Terrier is one of the smaller pit bulls you’ll come across. Typically, they weigh between 20 and 40 pounds, with an average height of 15 inches. The most common fur color is black, but there is some variation; it depends on where they were bred.

The Staffordshire Bull Terrier has a mild temperament and it’s one of the more friendly pit bull-type dogs. When it comes to training for service dog usage, this is one of our favorite breeds because they’re easier to train and socialize well with other animals.

These dogs came into circulation during the 1970s and started to gain popularity around the 1980s. Their medium build makes them great for hunting, tracking, and other tasks that require a lot of running.

When it comes to pit bull-type dogs, the American Bully is one of the newest breeds. These dogs have only been around since the 1980s, and they share many traits with Staffordshire Bull Terriers and other pit bull-type dogs.

What’s unique about these dogs is that they’re specifically bred to have a good temperament, as long as the breeder is reputable. Still, these dogs often get a bad reputation because many people breed them as fighting dogs. Luckily, most American Bully dogs are loyal to their owners, friendly, and known for being gentle with children.

American Bullies are also easy to distinguish from other pit bull breeds. This is because of their muscular body structure and smaller size. Their center of gravity is lower than the ground, and their average height is 15 inches, which is about five less than most terrier-style pit bulls.

When it comes to these dogs being used as service animals, they’re a good choice among pit bull breeds. If you have children or people that will be around you often, the level of affection that these dogs provide makes them easy to train. Still, we recommend starting young with these dogs because they become set in their ways as they grow older.

Which Breed Is the Best?

When considering a pit pull for a service dog, there are many things you need to take into consideration. You need to determine whether or not your pit bull is trainable, if they have the right demeanor, and if they will pose a threat to other dogs or people. So, most pit bulls are viable options.

While pit bulls have been given a bad reputation over the years, the various pit bull breeds can make great service animal companions. Pit bulls are easy to train, work with, and most of the time, they’re friendly animals. If you’re looking to register your pit bull as a service animal, as long as you follow the proper steps and training, it can be done.