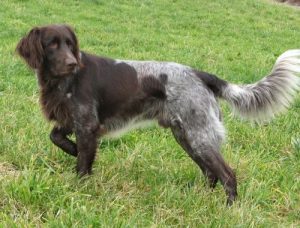 Looking for an intelligent, loyal, and friendly pup for an emotional support animal (ESA) or service animal? The German Longhaired Pointer is worth considering. This unique breed is considered one of the best breeds for service work as it’s very easy to train and has low reactivity and aggressiveness.

Considering adopting a German Longhaired Pointer? Here’s everything you should know about this beautiful breed.

What Is a German Longhaired Pointer?

First developed around the middle of the 19th century as a gundog in Germany (as the name would suggest), the German Longhaired Pointer has always been a highly sought-after working dog. This is not the only quality the breed has going for it, however, as it has also been an incredibly popular breed for companionship and as a family pet. Their loyalty, friendliness, and intelligence make them just as comfortable in a home environment as a working environment. As a result of this, the German Longhaired Pointer breed has gained popularity not only in its native Germany, but all over the world.

Around the turn of the 19th century in Germany, hunting enthusiasts started to breed highly skilled gundogs, and by the time of the middle of the century, long, slim, large-headed, and “strong nosed” dogs were developed. While these dogs were nice to look at, they had fairly negative temperaments as they were headstrong, stubborn, and strong-willed. This made them overly difficult to handle. At their core, however, they were good, hard-working dogs.

As time went on, multiple other breeds were introduced into the melting pot, including English Setters and Pointers, while the German canine associations were beginning to make an attempt at laying down breeding standards. This was done while promoting better hunting skills in their dog breeds. The first gundogs started to pop up in Frankfurt around the late 1800s. From there, breeders would continue to try to improve the hunting abilities of any given breed. Eventually, the German Longhaired Pointer was achieved. Any example of the breed today can trace back their ancestry to all of the top dogs being used for the breeding programs back in the late 1800s.

The German Longhaired Pointer breed has been an incredibly popular and highly sought after breed, not only in Germany but also in other parts of the world, due to its exceptional skills as a gundog.

As something of a noble, athletic, muscular, and elegant canine, the German Longhaired Pointer possesses a medium length (in spite of the name!), shiny coat. The top of the German Longhaired Pointer’s head is domed somewhat, without much in any way of a pronounced stoop. Their heads are often described as aristocratic. These features give the breed an overall charming and regal appearance. Their noses are brown, sometimes with a minor speckling, their jaws are strong, and the hair on the dog’s head is quite a bit shorter than the hair found around the rest of the body.

The eyes of the German Longhaired Pointer are quite large and oval-shaped and always dark brown in color. The ears are broad, turned slightly forward, and they sit close and high on the dog’s head. Thanks to the German Longhaired Pointer’s strong jaw, the breed has a scissor bite, with their lower teeth being perfectly overlapped by their upper teeth.

The German Longhaired Pointers have somewhat long necks, with slight musculature and arching, smoothly merging into the shoulders, which are also somewhat muscular and sloping. The bodies are strong, with broad, deep rib cages, reaching down as far as the elbows, and well-developed sternums. German Longhaired Pointers have level backs, which are also relatively long and very muscular around the loins.

The hindquarters of the German Longhaired Pointer are quite powerful, owing in no small part to their strong, straight back legs and a long slightly sloped croup. The feet are arched and oval-shaped and compact, with nice, strong nails and pads, with a lot of hairy tufts between the toes. Their tails are moderately long, fairly feathered, and are held up by the breed in something of a scimitar shape, as they are stronger at the bottom of the tail before tapering up to the tip.

The German Longhaired Pointer has a beautiful and distinctive coat with a soft and lush undercoat. The longest hair on the body is found on their throat, chest, and stomach, whereas the rest of the body’s hair is much more close-lying and sleek. The front legs feature either mildly wavy or straight hair, while the back legs will be well feathered, although it is shorter just below the dog’s hocks.

The Personality and Temperament of a German Longhaired Pointer

The temperament of the German Longhaired Pointer breed is one of fierce loyalty, intelligence, and above all else, friendliness. The breed is renowned for forming incredibly strong bonds with their owners, which, while obviously a big positive, does have its downside when it comes to the breed suffering from separation anxiety when their owner isn’t present. When left alone to their own devices, they can don’t do well for long periods of time. This makes them best suited to families with at least one member spending a lot of time at home. The German Longhaired Pointer breed often also thrives more in a rural environment, as they love the freedom of running about in the great outdoors.

The most important time to start socializing a German Longhaired Pointer is while they’re still young pups, and it must absolutely entail the introduction of brand-new noises, people, situations, dogs, and other animals. Of course, this should only be done once all the necessary vaccinations have been administered.

Their training should start just as early too, and throughout their life must be consistent. Due to the German Longhaired Pointer being so eager to please, and also because of their high intelligence, their training can come super easy given the right owner and the right environment, and there’s nothing they love more than the one-on-one attention given to them during their training.

All this considered, however, the breed can be a somewhat stubborn one, so if left unchecked, they can become quite unruly and difficult to live with. As with any breed though, with time and patience, any effective training can overcome any stubborn nature.

On occasions, the breed may be a little bit standoffish with strangers, but a German Longhaired Pointer should never go as far as to show any sort of aggressive tendencies toward someone they aren’t familiar with. If anything, they’d sooner keep their distance until they begin to feel comfortable with a new person.

Does the German Longhaired Pointer Have any Health Problems?

The German Longhaired Pointer is generally considered to be a very healthy dog, and certainly not one that seems to be affected by hereditary health issues that can often afflict other types of pedigree dogs. Their average life expectancy is around 12 to 14 years, about typical for a dog of their size. To also help maximize their length of life, it’s important that the amount of exercise a young German Longhaired Pointer pup is limited, so as to try to avoid too much pressure being put upon any joints that are still in development. This could lead to a number of issues arising later on down the line.

With regards to neutering or spaying your German Longhaired Pointer, many vets will recommend owners wait until their puppy reaches the age of 6 to 9 months old, or even on some occasions when they reach 12 months of age. While these vets advocate for the puppy reaching a more mature age before undergoing a neutering or spaying procedure, others will instead recommend undergoing the procedure when the dog is 6 months old. They should never recommend any earlier than this, however, unless for medical issues. All breeds are different, however, so you should always consult with your vet first when considering having your German Longhaired Pointer neutered or spayed.

Just like with other breeds of dog, the German Longhaired Pointer can start to gain weight once they’ve been neutered or spayed, so it’s of the utmost importance to keep an eye on your dog’s figure. In the event that they are beginning to grow out a bit sideways, all it takes is to up the amount of exercise they’re receiving and lower their daily intake of calories. Older dogs can be especially prone to weight gain, so it’s imperative to control diet and exercise and avoid prematurely shortening your pup’s life expectancy. A lot of extra strain can be put on a dog’s internal organs when they gain excess weight, which, especially as they get older, can eventually prove to be fatal in some cases. Excess weight can also put too much strain on your dog’s joints and lead to disability and pain.

Why the German Longhaired Pointer is an Awesome Emotional Support Animal

There are many great qualities that go into the best emotional support animals. When choosing the right breed for an ESA, you’re probably interested in an adaptable, intelligent, gentle, outgoing, loyal, friendly, and affectionate animal. The German Longhaired Pointer can tick all of these boxes.

Due to the incredible loyalty and loving nature of the German Longhaired Pointer, the breed makes for a perfect emotional support animal. This breed travels very well, offers great support, and does very well as a working dog with a job. German Longhaired Pointers aren’t aggressive and are, in fact, known for their peaceful nature and avoidance of aggressive situations which makes them well adapted to social situations, airplane travel, and crowds.

If you have decided to adopt a German Longhaired Pointer as a service animal or emotional support animal, you can look forward to a dog that’s as calm, loving, and intelligent as it is beautiful. Make sure your German Longhaired Pointer is registered as an ESA or service animal, however. US Service Animals takes pride in our easy, fast ESA registration process that includes an ID for your dog, a certificate, and inclusion in our nationwide database.